Nick Didkovsky is a guitarist, composer, and music software programmer. He founded the rock band Doctor Nerve in 1983, the metal band Häßliche Luftmasken in 2011, the metal band Vomit Fist in 2013, and is a member of the Fred Frith Guitar Quartet. He has composed for Bang On A Can All-Stars, Meridian Arts Ensemble, ETHEL, and others. His compositions and guitar work appear on over 50 records. 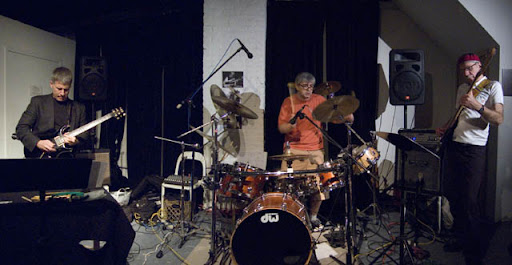 In 2010, he founded the $100 Guitar Project with Chuck O'Meara. His Punos Music record label serves up his more extreme musical projects.

It was an acoustic Stella with steel strings. The strings were about a mile above the fretboard. It hurt my fingers VERY much to play this guitar!

This is a wonderful question. There is something ecstatic about the state of playing it (some of it), that cannot be compared to anything else in my life.  It is an extremely joyful, intensely focused, and wholly consuming experience, at its best.

Probably because my mother decided to learn to play guitar when I was about 8 or 9 years old. I think this is unusual: for an adult to pick up something completely new. It was rare and wonderful for me to witness her learning new chords and new strums, watching her struggling with them, see her joy when she mastered it. It was a tangible demonstration of developing a complex skill starting from zero. I think most children are brought into the world and experience their parents already doing things at an expert level. Children have no direct experience to see how the parents achieved these skills. For a child to watch a parent learn something the way a child does, from the very beginning, that was extremely formative and fortifying for me. Also of course, the guitar was culturally the most popular musical voice when I was growing up, so the allure was very strong already, independent of my mom's decision to learn the instrument.

I am most proud of the CD Doctor Nerve "SKIN". Everything came together in a magical way for that record. I think my compositions reached a peak of exploring the capabilities of what Nerve could do. We also were lucky enough to get a recording grant which let us really spend a good healthy chunk of time in the studio. I had also gotten a new guitar at that time, which was reflecting a change in my approach to playing, and the record captured that.

After SKIN, the work I am most proud of is the CD BONE "Uses Wrist Grab" with the dearly departed Hugh Hopper on bass and my high school friend John Roulat on drums. It was such a joyful collaboration. And the CD "Upbeat" by Fred Frith Guitar Quartet. Being a mix of live and studio work recording in the middle of a tour, I think that CD managed to capture the quartet at its high point.

I dream of composing large masses of slowly evolving sound. Strange that I create so little music that is even remotely like this.

Probably a few licks from Deep Purple's "Strange Kind of Woman" off Made In Japan, where Ian Gillan and Ritchie Blackmore trade licks and imitate each other. I think I picked a few of those up when I was in a high school band, and the other guitarist and I were going to trade those licks. I guess I could still play it, but it's more of a free form call and response than it is a solo to be memorized.

The player's attitude!  I think a bad guitar is a *very* rare thing: one that refuses both to deliver those things the guitarist normally expects as well as refusing to bring anything new or idiosyncratic to the table (ie something the guitarist may not have expected but finds interesting after changing playing strategies). It really has to do with the player, the player's expectations, and how much the player is willing to adopt a different viewpoint to accomodate that which is unique about the guitar. For example, the $100 Guitar  was described by one player as "a shovel with strings" while another described it as "wonderfully resonant". The guitar itself cannot possibly be both good and bad, right? It is a function of the player.

Like always: extraordinarily varied. If one's favorite stream of music seems to have reached a dead end it is tempting to say these current times are not interesting. But there are other streams that are new and fresh and exciting that you need to seek out. Look to the underground.

Change just before people expect you to (Shep Shapiro)

Probably my favorite pedal is the Landgraff Dynamic Overdrive. It is handmade, and I bought #83. Mine is painted with flames like a hot rod. Now the paint is chipped off here and there and it looks very cool. It is a wonderfully sonorous pedal that I originally bought to record the BONE record. Then it became a pedal that was sometimes on for an entire show, an integrated part of my sound. That's not the case now, but that pedal meant a lot to me. I thought I lost it recently, which was painful. I rediscovered it in the bottom of my gig bag while on tour with DITHER Guitar Quartet, right at the end of a sound check as I was putting my guitar away (I put my guitar in the bag and heard a 'clunk' and knew right away that had to be the pedal). The guys in the quartet had no idea why I was suddenly screaming and laughing... it took me a few minutes to explain that I thought I'd lost it, when in fact I'd been carrying it around for months without knowing it. Some metaphor in there perhaps about missing something that never really left you...?

As a composer, probably Bartok because of his common sense approach to applying mathematical principles to composition. It's something I can relate to as a way to shape a composition, much more than I can relate to other formal traditions. By common sense, I mean everyone can easily be shown how the golden section is found in the spiral of a conch, and everyone can be shown how it can be applied to organizing time.  You don't need an advanced musical or mathematical education to at least be intrigued by it. It's an intuitive and satisfying approach. Later, in my computer music programming, and the design of the computer music language JMSL (www.algomusic.com), I was guided by a similar attitude of straight forward and transparent application of theory.  That is, no matter how complex a formal idea is, there needs to be a very simple demonstrable guiding principle at its core that you can explain to a child. This is one of the reasons why I abandonned interest in Forte's theory of atonal music in favor of musical theories like Jim Tenney's which are rooted in perception (see his book Meta/Hodos).

Vomit Fist is a blackened grindcore metal band with my son Leo on drums and his best friend Skrag on vocals. Some of the most demanding and intense music I've ever composed and performed, and emotionally very rich as you can imagine, playing with my son. We're in the midst of recording our first EP, which should be out before the summer.  Very excited by this band. Leo's a very extreme and super tight drummer; the level of performance in this band is very high, and being only two instruments (guitar and drums), there's an element of risk in the music that is an intense thrill for me.