Javier Pedreira. Spanish Guitarist - Improviser. Vocational musician, professional since 1989, he has worked over 20 years in both study recordings -more than a hundred- and live ones around the world with a variety of artists, either within the pop music scene, Mikel Erentxun, Luz Casal, Amaral, Najwa Nimri , Quique González, The Cabriolets ... other musicians, Tino Di Geraldo, Jorge Pardo, Suso Saiz ... and some interesting personal projects, Latino Diablo and Extraños en el Paraiso. Throughout his career he has been working as a performer, producer, musical director and has been session musician for TV series and movie soundtracks.

With Miguel A. García (ERRA FAGUS)

In free improvisation, his concept of the art and language of the guitar is a revolution of this iconic instrument in the Iberian identity, that's playing along the evolution of Spanish music soul  from the time of the vihuela. This has led to collaborations with leading musicians on the international scene as William Parker, Abdul Moîmeme, John Bisset, Seijiro Murayama, Miguel A. García (ERRA FAGUS), Paloma Carrasco (MOON- DOS) and Wade Matthews (GENMAICHA).

My first guitar was a Spanish to which the head stock broke and never finished fine. Years later I bought an electric Cimar (Ibanez) second hand, with a small amplifier. I remember breaking strings all the while using the whammy bridge.

How would you define "improvisation"?


Creation in real time. Flux in coherence with time and space.


Which is the main pleasure of the guitar? What led you to start playing guitar?

I do not recall precisely what lead me to play guitar. Remember when I was a child, I imagined music in my head.

I do not believe in what is called "extended techniques" as all technique involves an extension of the instrumental concept somehow, as the outcome of a need. For me, technique is not an absolute and depends entirely on the musical situation.


"The physical intelligence of the universe"

A bad orchestra. I feel that we -socially spoken- need that somebody lead us, because we still don't have enough confidence in ourselves to interact freely and make it work.


For me is: what is the importance of music in technique?


What's your prefered, fetish, diferential device in the sound chain?

For me the instrument begins in the strings and closes in the amplifier. It's a body without organs. 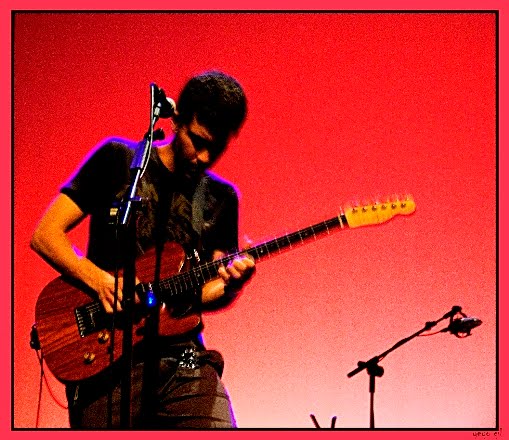 Giacometti, because he reached a point of confidence in his work in which the only reason to continue was to be able to understand his artistic medium, something which, after decades, it seemed unattainable.

And Bruce Lee, martial arts and the estimation that if an enemy exist is yourself.

And soon will be edited cds of Genmaicha (duet with Wade Matthews), Moon-Dos (duet with Paloma Carrasco) y Erra Fagus (duet with Miguel A. García).

And I have a pending recording in duo with my friend Abdul Moîmeme.....

The first two records i bought with my own money were "NEVER MIND THE BOLLOCKS" by SEX PISTOLS and "LONDON CALLING" by THE CLASH.  It was the same day, some days before my 11th birthday. Things changed inside of me since then. The last record i bought a couple of days ago was "WARPAINT" by WARPAINT and co-produced by FLOOD, one of my favourite producers. I really love the album, the voices, the guitars sounds and the overall mix.