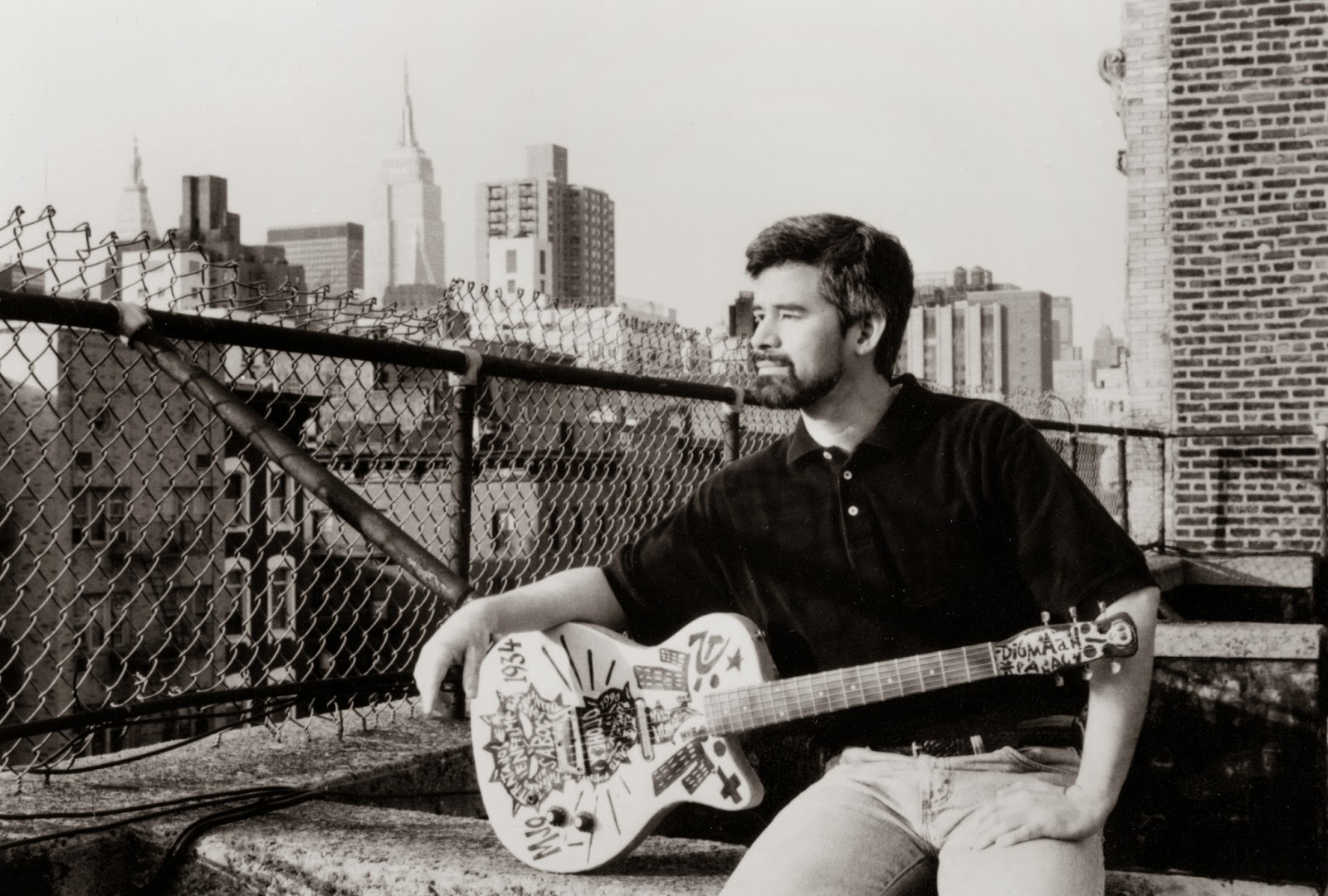 Roger Kleier is a composer, guitarist, and improviser who began playing electric guitar at age thirteen after discovering Captain Beefheart and Jimi Hendrix on the radio airwaves of Los Angeles. He studied composition at North Texas State University and the University of Southern California, and has developed a unique style that draws equally from improvisation, contemporary classical music, and the American guitar traditions of blues, jazz, and rock. Much of his compositional work involves the development of a broader vocabulary for the electric guitar through the use of extended techniques and digital sound manipulation. He has also written new works for soloists and chamber groups. Roger describes his approach to composing: “Having grown up in Los Angeles, I’ve always had an attraction to noir ambience. My music has often been inspired by the dark and hidden experiences of life, such as urban chaos, cold and icy winters, empty alleyways, deserted subway tunnels, dank Los Angeles River aqueducts, and even an occasional quiet pool of sinister beauty”. 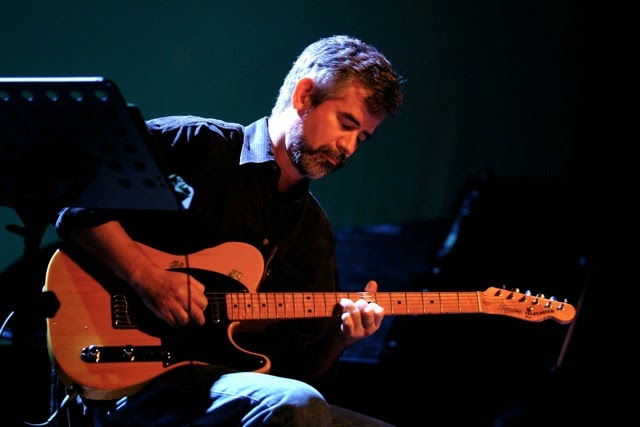 Roger has been a guest lecturer and educator at the California Institute of the Arts, the Academy of Performing Arts Prague, Washington University St. Louis, Edith Cowan University Perth, Hartt College Hartford CT, San Francisco State University, Mills College Oakland, St. Cloud University Minnesota, the Perpich Center for the Arts Minneapolis, and Princeton University. He has received grants from the National Endowment for the Arts, the Rockefeller Foundation, the American Composers Forum, the McKnight Foundaton, and Meet the Composer. Residencies include the Djerassi Foundation, the American Academy in Berlin, a McKnight Visiting Composer Fellowship (Minnesota), a Harvestworks Fellowship, an Engine 27 Project Residency, the Gerald Oshita Fellowship, and he was the Composer-in-Residence of the Center for Contemporary Music at Mills College Oakland. Along with Annie Gosfield, he co-curated the Stone concert series for the month of August, 2010. 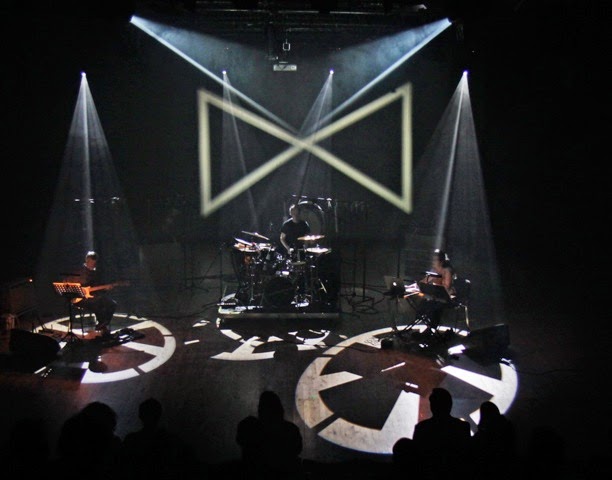 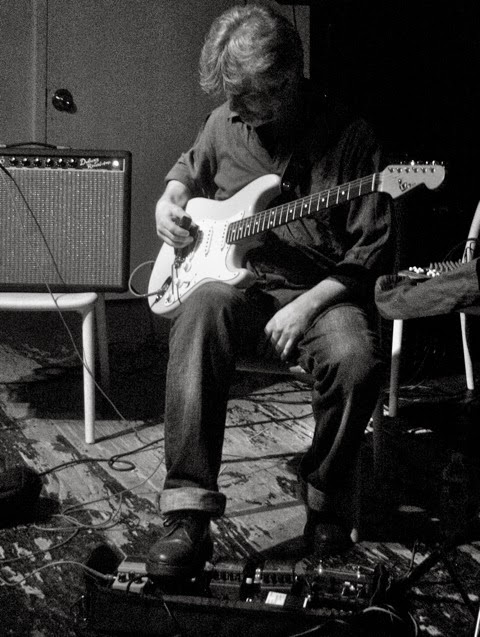 “Continuing the path-breaking innovations of Jimi Hendrix’ intense timbres and wall of guitar blocks of sound, with muted colors and reflective moods...”

He has a knack for creating rich, beautiful textures, which really shine because of the expert production.”

I first fell in love with the sound of the electric guitar when I heard Jimi Hendrix's "Foxy Lady" on the radio. I was very young, but I knew I wanted to play an electric, not an acoustic, as most people at that time used for learning the instrument. I wasn't interested in having a "folk guitar" period. I was finally given a cheap electric guitar for my thirteenth birthday, a Japanese model with the brand name "Audition" on the headstock. It was just one of a million beginner level instruments churned out of factories in Asia, but it was mine and I thought it was great! It had two pickups, a couple of slider switches, and a vibrato arm that really didn't do much of anything. It was sunburst, and very lightweight. I played it for hours on end, trying to teach myself riffs by Tony Iommi, Jimmy Page, Billy Gibbons, and of course, Hendrix. A few months later I saved up enough money to replace it with a 1970 Fender Jazzmaster and an Ampeg Scrambler fuzz box. Heavenly!

I think that our ability to make music is hard-wired in our brains, just like our ability to talk and invent languages. Music has been very important to humans for communication, transmission of information to the next generation, cultural and group identity bonding, and just plain enjoyment. Besides, I wouldn't want to live in a society where there wasn't music. Just too boring!

For me, it is a very visceral experience--I move my fingers a certain way, and sounds that please and interest me come out of the amplifier. It is a joyous and direct feeling, very natural for me.

For my own work, my most recent solo CD The Night Has Many Hours Innova 685. I think this release has a good overview of my aesthetic and approaches to the guitar, and the CD as a whole seems to exist in its own universe. I've never made anything quite like it before, and I learned a lot about my own music in the process of putting it together.

As far as sideman work, I am very proud of my contributions to Annie Gosfield's recording of her sprawling factory sound inspired epic, EWA7. It's on her Tzadik release, Flying Sparks and Heavy Machinery Tzadik TZ 7069. The CD was a lot of fun to record, and I got to showcase many of the different stylistic things that I do with a guitar.

Technique simply provides shortcuts to whatever it is you are trying to express. Very handy to have, but not always completely necessary.

For me, having worked on technique for many years just means I don't have to think of it much when I actually perform--it's just there imbedded in my fingers. I do think that guitarists can obsess too much on the finer points of it all, though. Thinking about it too much can lead to an athletic approach to the instrument rather than a musical one. I'm not interested in guitar playing being treated as an Olympic competition, nor am I thrilled by finding the most esoteric scale that can be layered on top of a difficult chord progression. Like Billy Gibbons suggests, "Just play whatever y'all want to hear!".

I experience time by being fascinated by the debates about the actual concept of time. Is there really such a thing as time, or is it just a unit of measure that we all agree on so we can organize our lives?

One influence on me is Julian Barbour's The End of Time, a physics book that tries to prove that time is an illusion, and all events are just a series of encapsulated brief "nows" that may or may not link to one another. I think that this concept relates to improvisation, and the way spontaneous music can be so fleeting, a mere "now" experience that moves on to the next "now". 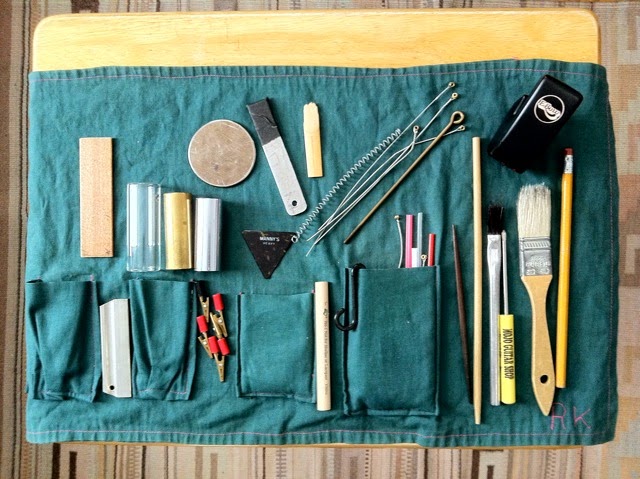 Another influence is Gottfried Leibniz's treatise La Monadologie (1714) in which he proposes that the universe is made of simple irreducible particles, or "Monads". Each Monad holds its past, present, and future in its existence, and Monads react to each other in unique ways creating everything around us. I find this concept to be a great metaphor for the musical universe, because of the way musical actions can grow out of nothing from its past, reveals a present that we experience aurally, and then hints at what might come next in the future.

I experiment with time in several ways. I might layer loops that never sync up together, or I can juxtapose a slowly evolving sound with quickly changing parts, or write a melody that is fifteen measures long in an odd meter with the melody crossing the bar lines. Essentially, I like anything that can mess with any strict methodical sense of time passing.

I think it is less about a guitar being "good" or "bad", but more about whether it is good for your own purposes. If the guitar makes the noises you want to hear, then it is a good choice.

A best of times/worst of times situation. There is an enormous amount of media information available because of the internet, so you can find just about anything you would ever want to listen to somewhere out there. Good for educational purposes, because you can do research about anything. It's also a great time for sharing your music. If you want the world to hear your music, there is somewhere you can make it available, either for free or whatever you want to charge for it. It's possible for like-minded musicians to connect all over the world this way, and this is a good thing for new and experimental musics overall.

However, there are three major downsides to all this music available on the web. First, it gives the impression that all music is free for anyone to take--just post it on You Tube for all to listen, completely free of charge! A very bad situation for musicians and composers trying to scratch out a living. Why buy anything because it's just sitting there for no charge? 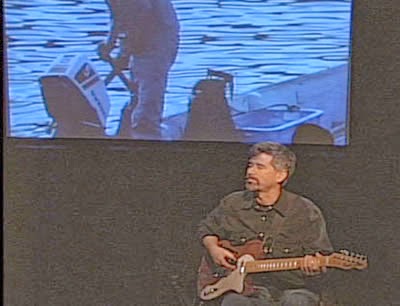 Second, social media can be a very alienating environment, and with the constant bombardment of information on these sites, attention spans grow short. A lot of new music demands real focus, and social media doesn't really allow that kind of commitment of time.

Third, all major art and cultural movements since Dada and Futurism, through the 60's, and on to Post Punk have been largely politically motivated, and there was a sense of true connectedness with these motivations. I feel that social media has greatly reduced that physical sense of shared experience and cultural bonding, and replaced it with very superficial artifacts and gestures. A thumbs up "like" on a Facebook page doesn't really substitute for a real human interaction!

My first composition teacher advised me to learn as much about music as possible, be as versatile as possible, and don't overlook any of my musical skills because they could provide a paycheck later in life. He was very right about this!

Distortion, overdrives, all things fuzzy. I really like exploring the sounds produced by different fuzz boxes, and I'm fascinated by the way different manufacturers create that buzzy sound we guitarists all know and love. I also enjoy learning the history of these metal enclosed wonders of noise.

Evening Star By Robert Fripp and Brian Eno. I first heard this not long after it came out in the Seventies, and at that point I felt stuck in a pattern of the usual rock, blues, and jazz licks that were standard for the time. I wasn't feeling satisfied on the instrument, and I wasn't really growing musically as much as I wanted. When I heard the looped guitars processed by Eno on this cut, and Fripp's fiery guitar solos, it really opened me up to new ideas. Genre differences ceased to dominate my thinking, and I began to meld everything together to see what would happen.

However, I have to say that hearing Fred Frith's first solo record at the same time in my life had a similar effect, so maybe it's a tie between two musical works that provoked change in my music.

I am working on several projects now. I have two CD recordings that are awaiting release--one is a solo project that involves a lot of guitar sounds manipulated in Ableton Live, and a group project with myself, Annie Gosfield on sampling keyboards, Trevor Dunn on bass, and Ches Smith on drums.

I am also slowly developing a project with Annie and vocalist/percussionist David Moss that is a larger piece based on Leibniz's monad theory. More opportunities to play with time!

The Night Has Many Hours. Innova 685 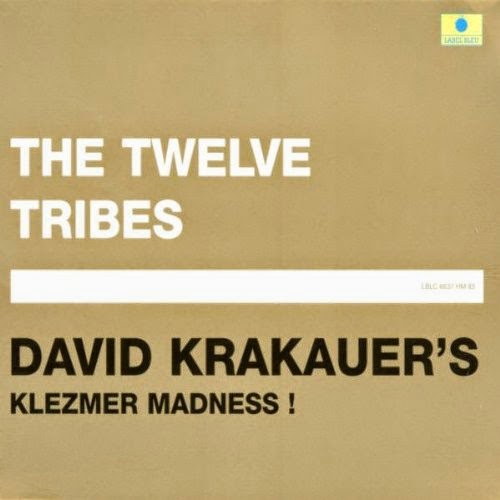 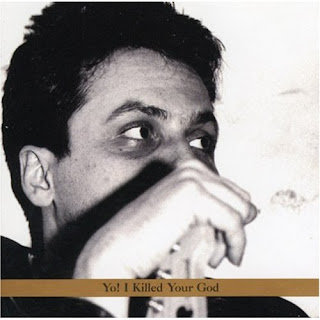 Marc Ribot and Shrek Yo! I Killed Your God Tzadik TZ 7134 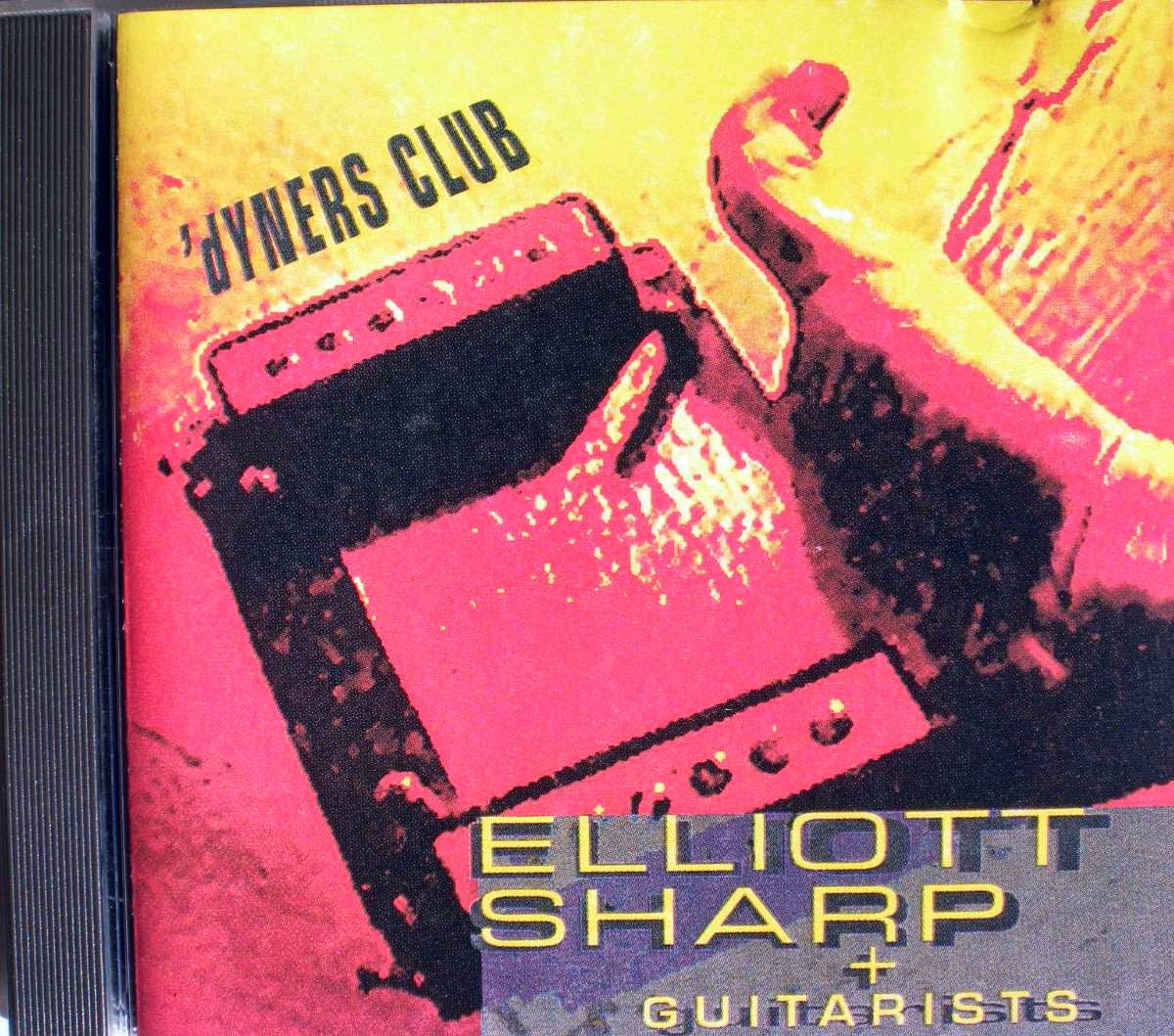 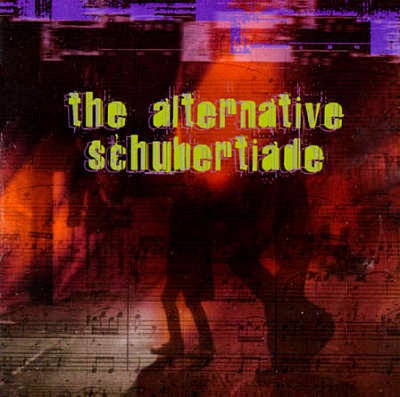 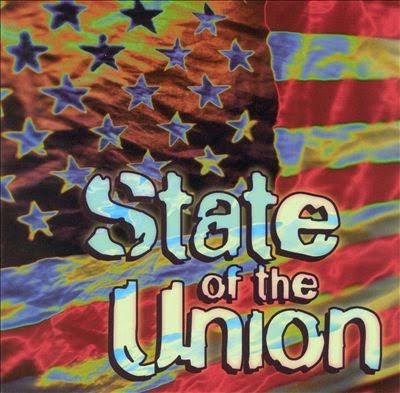 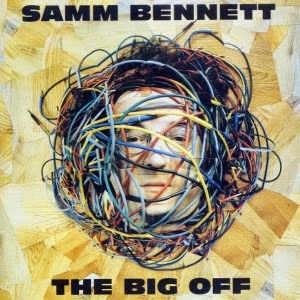 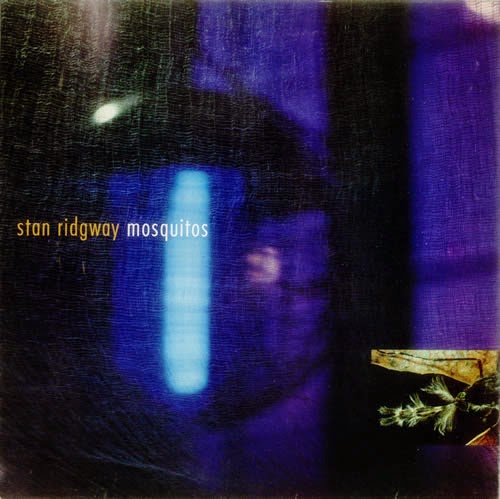 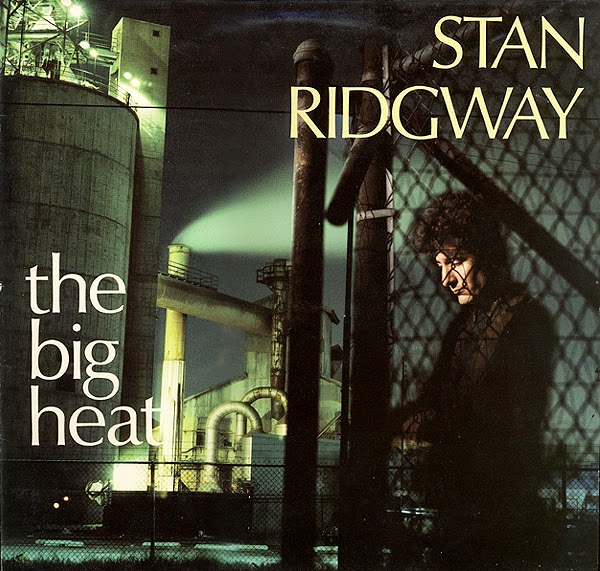 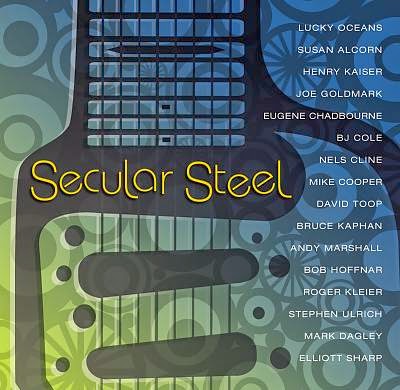 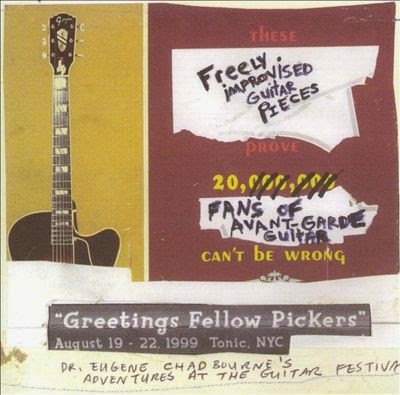