For brevity’s sake it would be safest to call Harrison’s home base jazz, a descriptor that mutates to fit a staggering array of styles and approaches. He finds inspiration from music too often barred from admission into the jazz consciousness, taking his place in a tradition of exploration and interpretation that reaches through the open-eared reinventions of Miles Davis and Charles Ives to the American rhapsodies of Walt Whitman, Jack Kerouac, or Hank Williams. 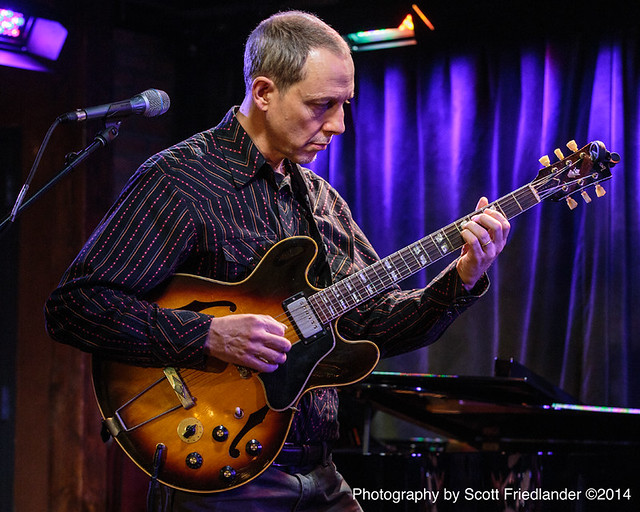 “Ultimately you’re just trying to arrive at great music,” he says. “Sometimes the best methodology is to leave people to their own devices, and sometimes it’s best to write everything down. It’s that simple.”

Harrison’s success can be seen in the accolades he has received: he was named a Guggenheim Fellow in 2010, is a two-time winner of the Jazz Composer’s Alliance Composition Competition, has received grants from Chamber Music America, Meet the Composer, the Flagler Cary Trust, NYSCA, and the Jerome Foundation.

Growing up in 1960s Washington D.C., Harrison became enamored with the inventive guitarists who were blazing the era’s new trails, such as Jimi Hendrix and John McLaughlin. In his twenties, after graduating from Bard College, Harrison undertook what he calls “the classic Jack Kerouac search for America,” hitchhiking cross-country and exploring the rich diversity contained between its coasts. “I wanted to figure this country out.” Sure I was a little naive, yet that search still resonates in my music.

A gifted arranger, he has also delved into the work of other composers – Beatles guitarist George Harrison, for instance, on 2005’s Harrison on Harrison (Highnote), or legendary drummer Paul Motian, whose repertoire Harrison arranges for string quartet and two guitars on his latest CD, String Choir (Sunnyside). No matter the source material, it is filtered through Harrison’s individual perspective, more an act of recomposition than arrangement.

Perhaps the most vivid examples of his own take on such experiments can be found on Range of Motion (Koch Jazz, 1997) and The Wheel (Intuition 2008), which bridge Harrison’s interests in classical and jazz. The former was written for an octet with woodwinds featuring Paul McCandless and bassoon player Paul Hanson; the latter also integrates the composer’s country and world music influences, replacing the winds with a string quartet that includes violinists Todd Reynolds and Christian Howes, violist Caleb Burhans, and cellist Wendy Sutter.


His classical compositions include Life Force, a collection of duos for cello and violin performed by Wendy Sutter and Tim Fain, on Philip Glass’ Orange Mountain Music label and a 2007 solo for marimba which won first prize in the Percussive Arts Society’s worldwide competition.

It was a nylon string. my first electric guitar made more of an impression. It was a Guyatone.

Obviously we need music because it's one of the oldest behaviors on the planet. It's good to keep asking this question. What makes your music essential? Why does certain music last?


Loud and with a groove


Not sure- it's a work in progress, always


Silence is the master

There's so much...recently Allaudin Mathieu heard some of my latest music and he said. "Try making your written sections as wild and loose as the solo sections."

Recently I rediscovered one of my first amps, a 1962  vibrolux amp. It's gorgeous, warm, inviting. Effects come and go but for some reason I just can't play without reverb. It just sounds bad to me without it! Why? I don't know. I love sustain. I like trying to sound like a violin or pedal steel.

I've written a number of songs that I plan to record. They are not about jazz at all. Back to my songwriting roots in Beatles, Robert Hunter, Townes Van Zandt, Leonard Cohen etc.

[With this project] I wanted to challenge myself compositionally and try to use extended forms and some new techniques (for me) without sacrificing spontaneity, a tricky balance.

A wildly diverse improviser/composer/arranger with a penchant for unorthodox instrumental combinations, guitarist Joel Harrison has sustained one of the most unpredictable discographies of the last decade with his chimerical mix of jazz, blues, chamber music, African and Indian folk music, Appalachian tunes and old school country songs.

A six movement suite for string quartet and jazz quintet. A true union of the jazz and classical music traditions, with compositional influences from Appalachia and West Africa.

All new songs. “Harrison is onto something both innovative and compelling and deserves a much wider audience.” - Don Heckman, LA Times

This project is a singularly original journey into the music of George Harrison. Joel reinvents George's songs, with stunning improvisational, textural, harmonic, and rhythmic twists.

Once again Harrison and Free Country II travel along the seams of Jazz, Country, Blues, and Spirituals, using country classics, hymns, and folk tunes as a gateway to creative music making. Harrison has included his own compositions on this release, side by side with gems by Merle Haggard, Jimmy Webb, the Stanley Brothers, as well as timeless traditional tunes. Featuring Dave Binney.

Free Country is a collection of old Country and Appalachian tunes arranged in unusual, even radical, ways. Simply put, this body of work is my sonic view of the experiment known as America -- not the billboard, but the underbelly. Featuring Norah Jones and Uri Caine.

Blurs the lines between the historical categories of jazz... Intense, moody stuff that will lose jazz lovers lacking at least a decade of refining. -- Dave McElfresh: Jazz Now.

Native Lands is a collection of ethnic folk songs from around the world ­ arranged, performed and recorded largely with indigenous instruments and some modern aesthetics. Innovative arrangements from the traditional music of Tibet, India, Bulgaria, China, Bali, and Western Africa, and, original compositions inspired by the idioms of these lands.