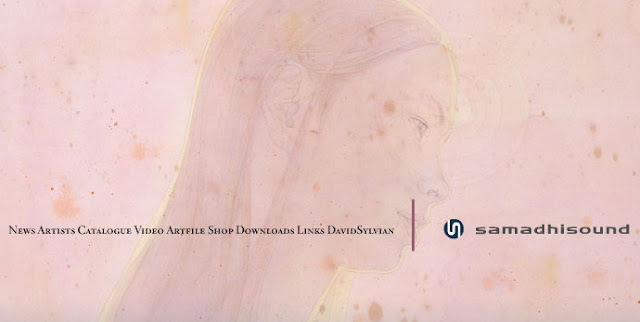 Samadhi Sound (or samadhisound) is an independent record label founded by singer and musician David Sylvian after his departure from Virgin Records in the late nineties.

The label mainly serves as a platform for Sylvian to release his own work – the album Blemish was the first to appear on Samadhi Sound in 2003 – and that of artists usually associated to him, like his brother Steve Jansen and Harold Budd. Nine Horses, a collaboration between Sylvian, Jansen, Ryuichi Sakamoto, Burnt Friedman, Arve Henriksen and Stina Nordenstam, released their 2005 album Snow Borne Sorrow on Samadhi Sound.

Akira Rabelais "then the substanceless blue"


On his Samadhisound debut, Spellewauerynsherde, Akira Rabelais crafted austere settings to found recordings of Icelandic songs of lament. His follow-up, Caduceus, is a different beast – a study of guitar and extreme distortion that’s both harsh and mesmerising. samadhisound founder David Sylvian describes it as “caustically romantic”: “Akira's recording presents you with an auditory experience quite unlike any other. It's by turns a brutal and discomforting ride. Outside of the full-on audio assault, there's unsettling disquiet in its quietude. Once heard it won't be forgotten and for those seeking out recorded music that is transformative, experiential, this material has that potency.”

Amplified Gesture, an introduction to free improvisation: practitioners and their philosophy.

A trailer for Amplified Gesture can be viewed on this page. The full length feature documentary is available as a part of the Manafon deluxe edition.

To fans of free improvisation and the Japanese onkyo, or noise scene, Toshimaru Nakamura needs no introduction; to newcomers, the name of his instrument the no-input mixing board may sound forbidding, as if its output would sound more machine than music. But for over a decade, Nakamura has cultivated a world of tones from this unlikely instrument, both harsh and mesmerizing, humanist and expansive with something to lure in music fans of any stripe.

Says founder of Samadhisound David Sylvian, Egrets has Toshi's signature minimalist stamp but sonically there's a lot more variation to this work. I have great admiration for Toshi, for his sense of discipline, his risk taking, his openness, generosity and intelligence.

Jan Bang "...and Poppies from Kandahar"

... And Poppies From Kandahar, Jan Bang's first album under his own name, evokes a powerful sense of place -- but it's not a place you would recognize, or ever expect to find. A descendent of Jon Hassell's "fourth world" concept, it sketches scenes of struggle and malice, in locales both primitive and urbane. As a producer, Bang stitches it together like a patchwork atlas and then makes the seams disappear: live recordings and studio constructions, old samples and new solos come together to form an exquisite whole.

'The Opiates - Revised' by Thomas Feiner & Anywhen. This revised, re-packaged and remastered edition of 'The Opiates' will be the first time many will have heard of the album or the artist Thomas Feiner. The release comes several years after Sylvian was introduced to the work, which he regards as something of a lost classic having only been released in a few territories. The addition of two new Feiner tracks have further strengthened what was already a remarkably beautiful recording.


Thomas Feiner & Anywhen "All That Numbs You"

From the album 'The Opiates - Revised'.
Video produced by K. Thorslund and T. Feiner.

Kalypso, the title of SBPs song, is the name of the goddess from Greek myth, and it reminds me of the song Orpheus from David Sylvians 3rd solo album. It is one of the most beautiful songs and will be one of my all time favourites as is Orpheus.

I have been haunted by this song Kalypso since I found myself looking out at the Atlantic Ocean from my hotel window whilst I was listening to it on a recent trip and it inspired me to create some images for the track which feature in this music movie. 4 months after I first started shooting I still love to listen to the track along with the rest of the album. The rich layers of musical and non-musical sounds crafted by these talented musicians invites us to set sail on its waves with its shadows of the mundane and the aesthetic, the mortal and immortal. The title suggests the love story from Greek mythology but Tims lyric enables us to reflect upon our own relationships.

There is no plot to the film. The approach here has a photographic aspect. The captured images evolve like a gentle breeze, an echo of remembrance. They act like a signal emerging from the music. Im hoping this movie will further invite you on a journey into the sounds of this song, and the album in its entirety, and help define a certain feeling in the hearts and minds of the listeners.

It was a great joy to make this movie. This work is my prayer for SBP who gave birth to this excellent album.