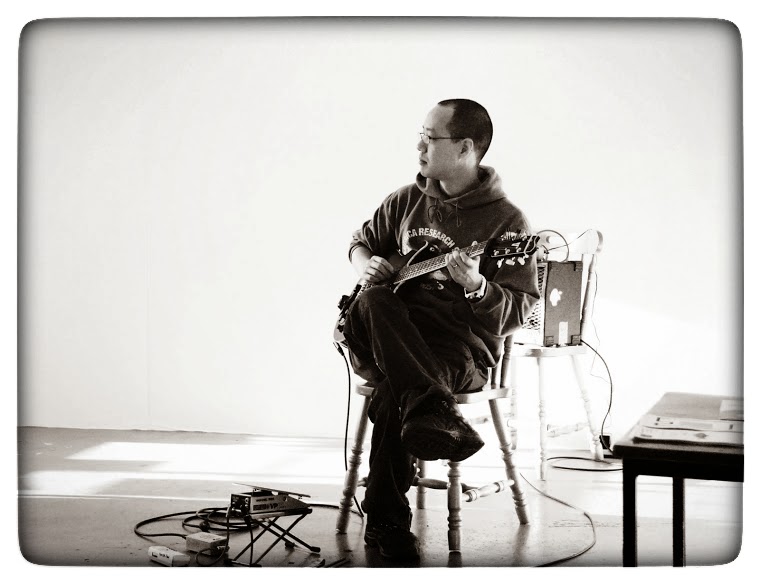 HAN-EARL PARK (박한얼), Improviser, guitarist and constructor has been crossing borders and performing fuzzily idiomatic, on occasion experimental, always traditional, open improvised musics for over fifteen years. He has performed in clubs, theaters, art galleries, concert halls, and (ad-hoc) alternative spaces in Austria, Denmark, Germany, England, Ireland, The Netherlands, Scotland and the USA. -- Park is part of Mathilde 253 with Charles Hayward and Ian Smith, Eris 136199 with Nick Didkovsky and Catherine Sikora, and Numbers with Richard Barrett. 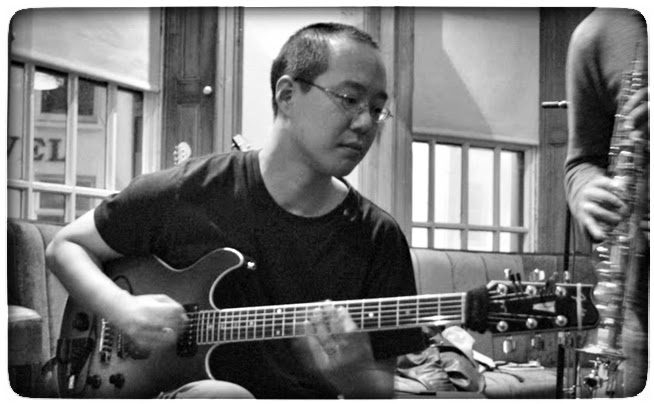 A cheaply made, Korean, nylon string that my mom bought me for my thirteenth birthday (’cause that’s what teenagers are into, right?).
It had a terrible action, usual cut-price construction, latterly did not keep in tune. It never fired my interest (it would take me a few more years before I reintroduce myself to the guitar).

Is the act of music a kind of resistance?

We live in strange times in which investment bankers are more important than mechanics, and copy writers more valuable than poets.

Blinded by neo-liberal dogma about ‘need’ boiling down to cartoon notions of profit, efficiency and growth, and, occasionally, even more mysterious notions such as reinvestment, not sure how best to answer your question. 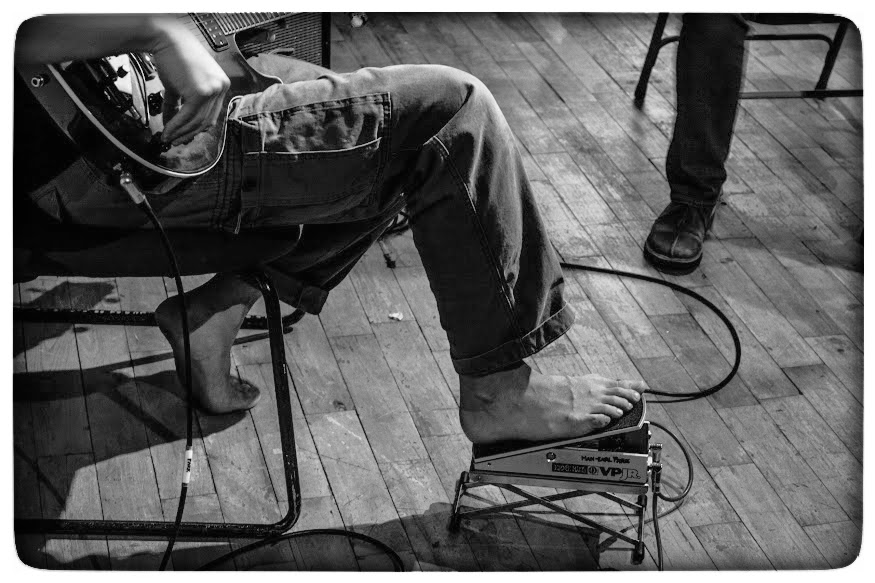 It may be that music and the attendant laboring class, musicians, will go the way of the gas lamp and the lamp lighters. But I, for one, think it’s tragic that music, the world over, may turn exclusively to the pre-20th century West European form; of a diversion for the wealthy, escapism for the working poor, or an activity in service to the powerful. I, for one, intend to go down fighting and screaming.

Pleasures? Physical: corporeal-technical problematics—how your body and guitar interface in the context of physics, physiology and luthiery.

Cultural: its unstable presence between rhythm section and lead instrument in terms of orchestration, ensemble social dynamics and audience perception.

Limitations? I’m not sure I see limitations, as such, though it is bound (if fuzzily). The boundaries that define what we collectively recognize as a guitar shape how we interact with it (physically, culturally), and, yes, how we perform music. The boundaries are where you find all the interesting stuff, and the shifting interface between guitar and guitarist (between instrument and luthier, between performance and culture) is where you find music and improvisation.

The duo project with composer-performer Richard Barrett. The kind of high-velocity, quick-footed interactions—a real moment-to-moment logical construction—took both of us, I think, by surprise from the very first time we performed (at AUXXX, Berlin in 2010). I certainly don’t play like that with anyone else. We were excited enough to record soon after (Numbers released by Creative Sources in 2012)….

We need to get that project back on the road!

In terms of why I picked up the guitar, I was inspired by a couple of records: Sonny Rollins’ The Bridge, Pat Metheny’s Question and Answer (yup, I still had dreams of a straightahead player).

But of the geography of latter-day improvising guitarists, I’ve been trying to navigate a space left between Frith, Frisell and Bailey (though I like to keep my bearings with Nix, Sharrock, Halvorson and Jeff Parker somewhere out there).

Anthony Braxton and Evan Parker, Duo (London) 1993. Made me give up common practice notation/composition/score-making.

Gestures and interactions that’re quicker than my ears. Something that plays before I imagined it; could have imagined it. Something that surprises me as I play (even as I’m fully conscious of the mechanics of production and performance).

The good: compression of time and place; bringing together of peoples and cultures; exchanges, negotiations, and exploration of dissonances across borders; opening access (to some extent) across economic class.

The bad: replacement of the connoisseur by the hoarder; the devaluing of musical labor and the professional musician; damage to independent record labels and stores; the confusing of availability with intelligibility. 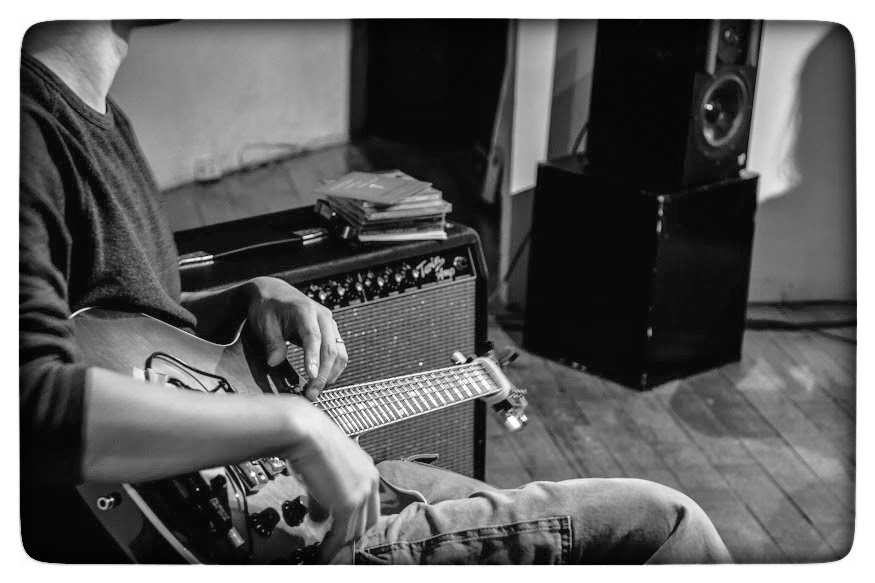 Musicians who (such as I did) invested in Open or Free Culture in its early days, made, in retrospect, a critical mistake. Punch drunk on the success of the Free and Open Software movements of the ’90s, we hoped (naively) to cutout the monopolizing forces in the production and distribution of recorded music. Unlike the Free/Open Software movements, we never invested heavily in any kind of evangelical or educational activity. I think a consequence of this is the continued entrenchment of major label power (in the form of Spotify, for example); the erosion of the adventurous independent record industry; and emergence of listeners who think beer instead of speech when it comes to the ‘Free’ in Free Culture.

It’s not a hopeless situation, but it’s a battle we fought badly; we can learn from our mistakes.

So what’s being ‘extended’ by ‘extended technique’? Is it akin to, say, a colonial explorer extending their influence and territory; ‘discovering’ a land (regardless of whether some other people were there first)?

Had an interesting online exchange with Hans Tammen on the subject, and it struck me how much the term ‘extended technique’ is a way to distinguish pioneers from the rest of us. Where you draw those lines (between common practice and extended technique) says much more about your own history and prejudices than some essential quality of the technique in question.

Ishmael Wadada Leo Smith once pointed out how Stockhausen claimed the invention of certain ‘extended techniques’ for the trumpet that were patently false if you had even a passing knowledge of practices outside of West European traditions. Did Stockhausen, and his supporters, claim these techniques because of a kind of ignorance, or as a deliberate erasure of other traditions? Either way, it requires a heavy dose of privilege to ignore, to justify your ignorance, or to mark peoples and cultures as irrelevant.

More from Wadada: “When they ask you to play the same thing again (and they will), say you won’t—not that you can’t, but that you won’t.” The improvisative as an ethical, moral choice.

Not very much. A guitar, buffer, volume pedal, a Tech 21 amp simulator, whatever amp the venue can offer.
Sorry, not much for gear fetishists unless you want to talk about the ergonomic placement of the volume pedal, or the effective position of the speaker cabinet.

Interaction as the coupling of bodies across the stage.

A CD with Catherine Sikora, Nick Didkovsky and Josh Sinton in the works. Looking to fire up a couple of European projects after a hiatus: the duo with Richard, and Mathilde 253 with Charles Hayward and Ian Smith.

But the thing that’s tugging at me right now is the possibilities of the score in the context of improvisative performance. Ideas, some specific, some nebulous, all as yet untested about what might be possible… 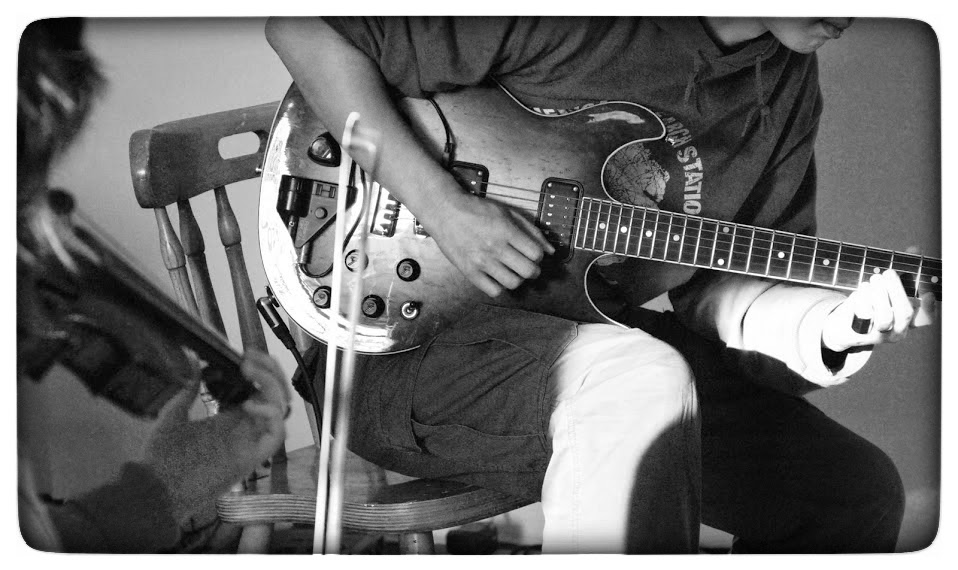 I’m not sure at all where this is leading, but having through some combination of ideology and necessity (ain’t it always the way?) found myself somewhat involuntarily in the ‘Total Improvisation’ camp, I’m beginning to look on the other side of the fence. Let me be clear, the, to borrow Lewis’ term, Eurological conception of the score and the practice that surrounds it (theorized in detail by Small, Cusick, Nicholas Cook and others), with its limited models of control and dogma of reproducibility, and naive notions of aesthetics, does not interest me at all.

However, I’m feeling a gravitational tug. Maybe it’s due to coming into close contact with musicians who have a much more sophisticated (if often, from an non-practitioner's POV, misunderstood and under theorized) relationship with the score and the possibilities of notation. But it’s a distinct pull. Still working—struggling—through some ideas, and studies, and have far, far more questions than answers about the possible role notation and the score might have in an improvisative context, but that’s the new thing that’s exciting me at the moment.

Tracks in the dirt by Sikora/Park/Grillot

Han-earl Park, ‘apophenia: A atomic symphony in 10 movements ii you seek iii a comfortable spot to listen iv to this v track the sofa perhaps vi or the vii floor however viii standing hand ix suspended over the volume x control you xi find that xii it is’, on Nick Didkovsky and Chuck O’Meara bought (curs.), The $100 Guitar Project, Bridge Records (2013, BRIDGE 9381A/B), compact disc and digital. 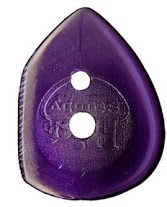