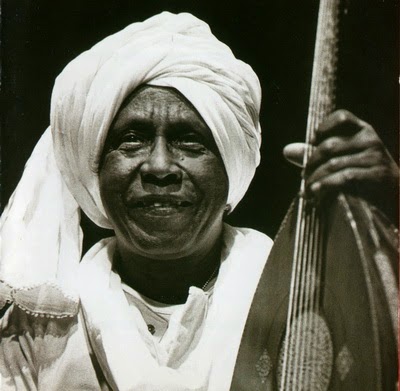 Hamza El Din (July 10, 1929 – May 22, 2006) was an Egyptian composer, oud player, tar player, and vocalist. Performing on the oud (the Arabian short-necked lute) and the tar (the ancient single-skinned frame drum of the upper Nile), along with his gentle voice and original compositions, Hamza combines the subtleties of Arabic music with the indigenous music of his native Nubia. He has single-handedly forged a new music, essentially a Nubian/ Arabic fusion but one in line with both traditions and informed by Western conservatory training. His music has captured the interest of listeners worldwide.

The oud (/ˈuːd/; Arabic: عود‎ ʿūd, plural: أعواد, a‘wād; Armenian: ուդ, Assyrian:ܥܘܕ ūd, Greek: ούτι Hebrew: עוּד; Persian: بربط‎ barbat; Kurdish: ûd; Turkish: ud or ut; Azeri: ud; Somali: cuud or kaban) is a pear-shaped stringed instrument commonly used in Arabic, Hebrew/Jewish, Greek, Turkish, Persian, Byzantine, Armenian, North African (Chaabi, Classical, and Spanish Andalusian), Somali and Middle Eastern music. Construction of the oud is similar to that of the lute. The modern oud and the European lute both descend from a common ancestor via diverging paths. The oud is readily distinguished by its lack of frets and smaller neck. It is considered an ancestor of the guitar.

First discovered by Western audiences through his performance at the Newport Folk Festival, the U.N. Human Rights Day and Vanguard recordings in 1964, his 1971 Nonesuch recording, Escalay: The Water Wheel is legendary among musicians and connoisseurs. The Escalay album, 1971 Nonesuch recording, was re-released in 1998. His best known recording in the U.S. is Eclipse, produced and engineered by Grateful Dead percussionist Mickey Hart. Hamza's music has also appeared in movies soundtracks including the Black Stallion, You Are What You Eat and, The Passion in the Desert.

Hamza has appeared regularly with the Kronos Quartet, which included Escalay: the Water Wheel on their chart-topping Pieces of Africa album (Elektra/ Nonesuch, 1992). From 1995 to 1997, Hamza toured most of the world. Hamza's 1996 album, Available Sound: Darius debuted from Lotus Records (Salzburg, Austria) and was nominated for the European equivalent of the Grammy, the Preis der Deutschen Schallplatten Kritik. A new CD A Wish by Sounds True was released in May 1999. Hamza's compositions were performed by many ballet companies such as Maurice Bejart Ballet, Paris Opera Ballet, San Francisco Ballet, Molissa Fenley Dance Company and Lines Contemporary Ballet in San Francisco.

Hamza El Din is considered the father of modern Nubian music. He was born in Toshka, Nubia, Egypt. Hamza studied at King Fouad University (now the University of Cairo), then enrolled in the Popular University and at Ibrahim Shafiq's Institute of Music (Shafiq was renowned as a master of Arabian music and of the Muwashshah rhyme forms). Following graduation, he continued his studies at the King Fouad Institute for Middle Eastern Music, mastering the oud. Later, with an Italian government grant, he studied Western music and classical guitar at the Academy of Santa Cecilia in Rome.

Next he emigrated to the U.S., where he lived and worked as a recording and concert artist, and taught as an ethnomusicologist in several American universities, including the University of Ohio (Athens), the University of Washington (Seattle) and the University of Texas (Austin). Aided by a grant from the Japan Foundation, he went to Tokyo to make a comparative study between the Arabian oud and the Japanese biwa during the 1980's. Today He resides in the San Francisco Bay area, and continues composing, teaching, recording and keeping a busy worldwide concert schedule. Hamza El Din composed music for the Kronos Quartet and for the play "The Persians" (directed by Peter Sellars). In recent years, he performed at major festivals including Edinburgh, Salzburg, Vienna, Paris, Berlin, Montreux, Barcelona, Los Angeles, Monterey and Festival Cervantino (Guanajuato, Mexico).

Hamza El Din, who has made his life's work reinterpreting the songs of his native region of Nubia on the oud, performed intense music with extreme quietude at Symphony Space on Saturday night... Ben Ratliff The New York Times, Reviews, March 2, 1999


Born in the village of Toshka in Southern Egypt, near Wadi Halfa in northern Sudan, he was originally trained to be an electrical engineer. After working in Cairo for the Egyptian national railroad, El Din changed direction and began to study music at the Cairo University, continuing his studies at the Accademia Nazionale di Santa Cecilia in Rome; he also studied in Ibrahim Shafiq's Institute of Music and the King Fouad Institute for Middle Eastern Music, and traveled in Egypt on a government grant collecting folksongs. His performances attracted the attention of the Grateful Dead, Joan Baez, and Bob Dylan in the 1960s, which led to a recording contract and to his eventual emigration to the United States. Like much of Egyptian Nubia, his home village of Toshka was flooded due to the construction of the Aswan High Dam in the 1960s.

(Hamza) began to evolve new musical forms by drawing the moods and colors of Nubian music into the vast technical and aesthetic structure of Arabic classical music. The result is not a loose amalgamation of tow variant forms of music but an entirely new mode of expression. What is especially significant is his full command of the technical possibilities of the Oud combined with new musical patterns and ideas, growing out of the vocal music and drumming of traditional Nubia. Elizabeth Fernea, Liner notes of Escalay: the Water Wheel, Nonesuch 1998

Following his appearance at the Newport Folk Festival in 1964, he recorded two albums for Vanguard Records released 1964–65; his 1971 recording Escalay: The Water Wheel (published by Nonesuch Records) is recognized as one of the first world music recordings to gain wide release in the West, and was claimed as an influence by some American minimalist composers, such as Steve Reich and Terry Riley as well as Grateful Dead percussionist Mickey Hart. He also performed with the Grateful Dead, most famously during their Egypt concerts of 1978. In this period, he also mentored a number of musicians, including Sandy Bull. Later, he released albums for Lotus Records and Sounds True. His album Eclipse was produced by Mickey Hart. He performed with the Kronos Quartet on an arrangement of Escalay in 1992. His pieces were often used in ballet performances and plays.

El Din establishes a skittering rhythm and a melody alternately intoned by oud or voice. The melodies come and go with microtones and scales... SF Weekly, Music Reviews, February 18-24,1998. 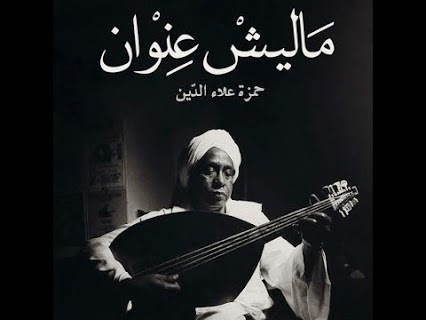 El Din held a number of teaching positions on ethnomusicology in the United States during the 1970s, 1980s and 1990s (in Ohio University, University of Washington, and the University of Texas at Austin), eventually settling in the Oakland, California after studying the biwa in Tokyo, Japan during the 1980s. In 1999, he released his last album, "A Wish". with Hani Naser.

Hamza El Din is a world music giant, an international emissary of Nubian music and culture and an artistic pioneer in the recording of world music. Rhythm Music Magazine, October 1997.

He died on May 22, 2006, after complications following surgery for a gallbladder infection at a hospital in Berkeley, California. He is survived by his wife, Nabra.

His playing, rich in overtones, is more relaxed, subtle and intricate than that of the typical oud virtuoso. San Francisco Chronicle, July 7, 1996 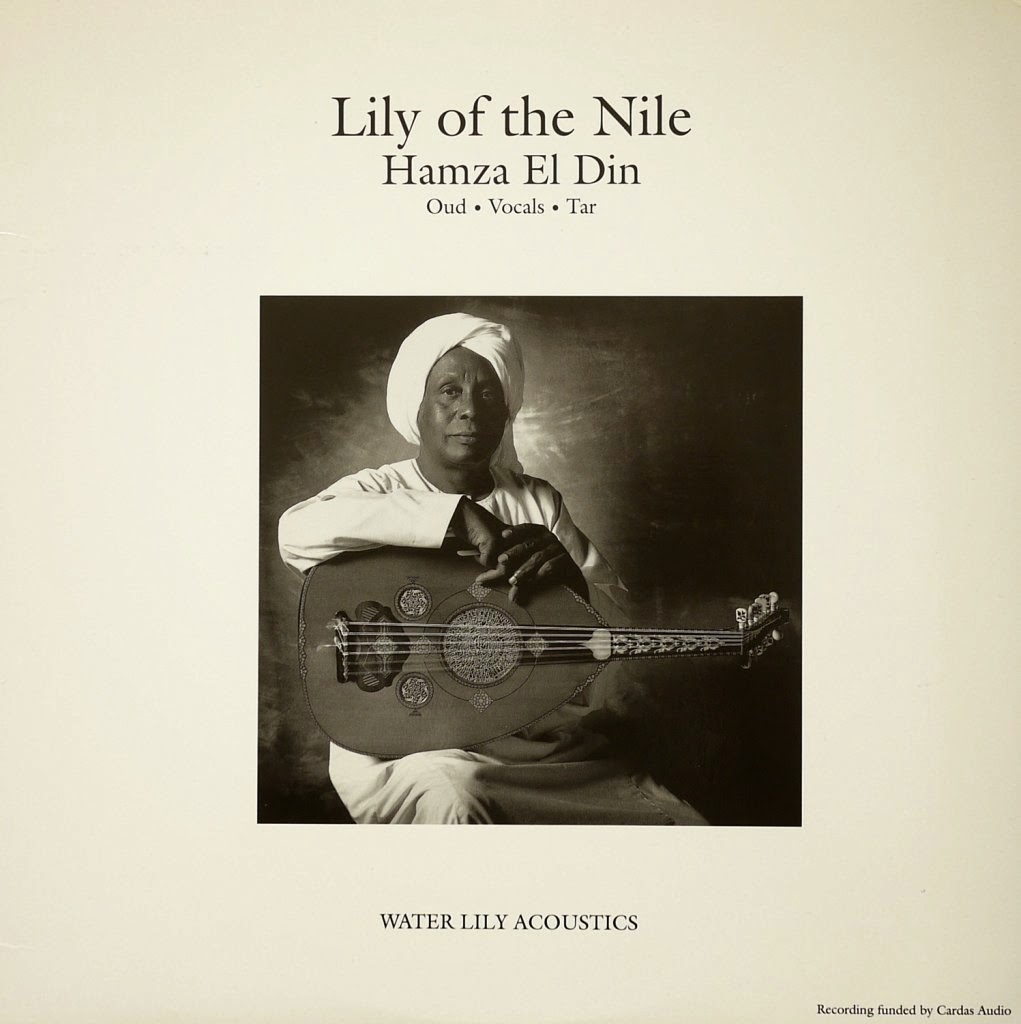 A warm cloud of silence seems to envelop the hall whenever this Nubian born Tokyo resident comes to town, A few impossibly elegant beats on his tar frame drum, some timeless notes plucked from an oud, or a couple of reedy vocal phrases, and you're off to a virtual Upper Nile desert. A more exquisite and less taxing holiday would be tough to conjure. Village Voice, (New York) March 8, 1994

Hamza El Din is one of the greatest ambassadors for Nubian and Egyptian culture ... [his] sound is so rich that it is sometimes hard to believe that only one man is playing. Al Ahram, (Cairo) January 20-26, 1994. 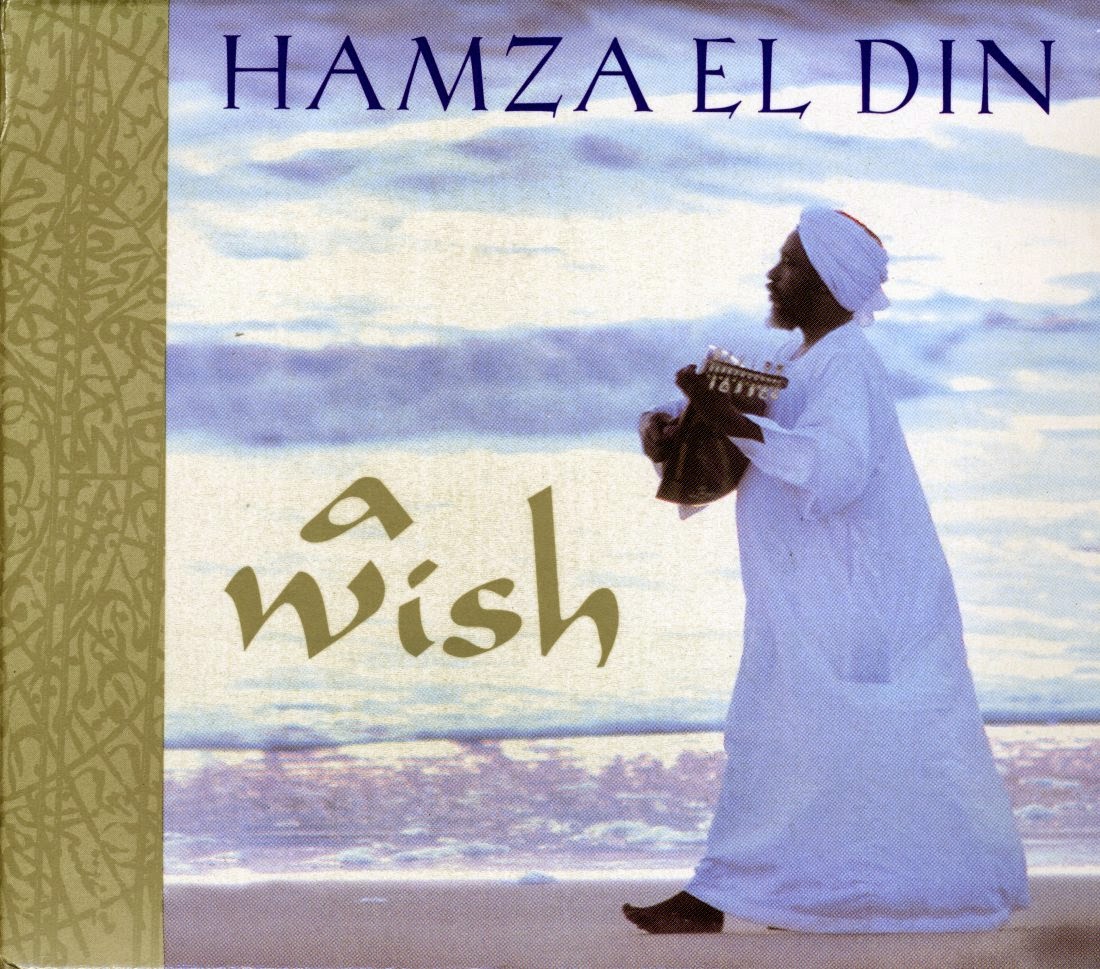 This was not some sort of exotic ethnic music, these were the songs and instrumental pieces of a great composer, steeped in the musical language of his Nubian heritage and gifted with the power to transform it into a shapely, sophisticated art form without destroying its own sense of place. LA Weekly, September 3-9, 1993. 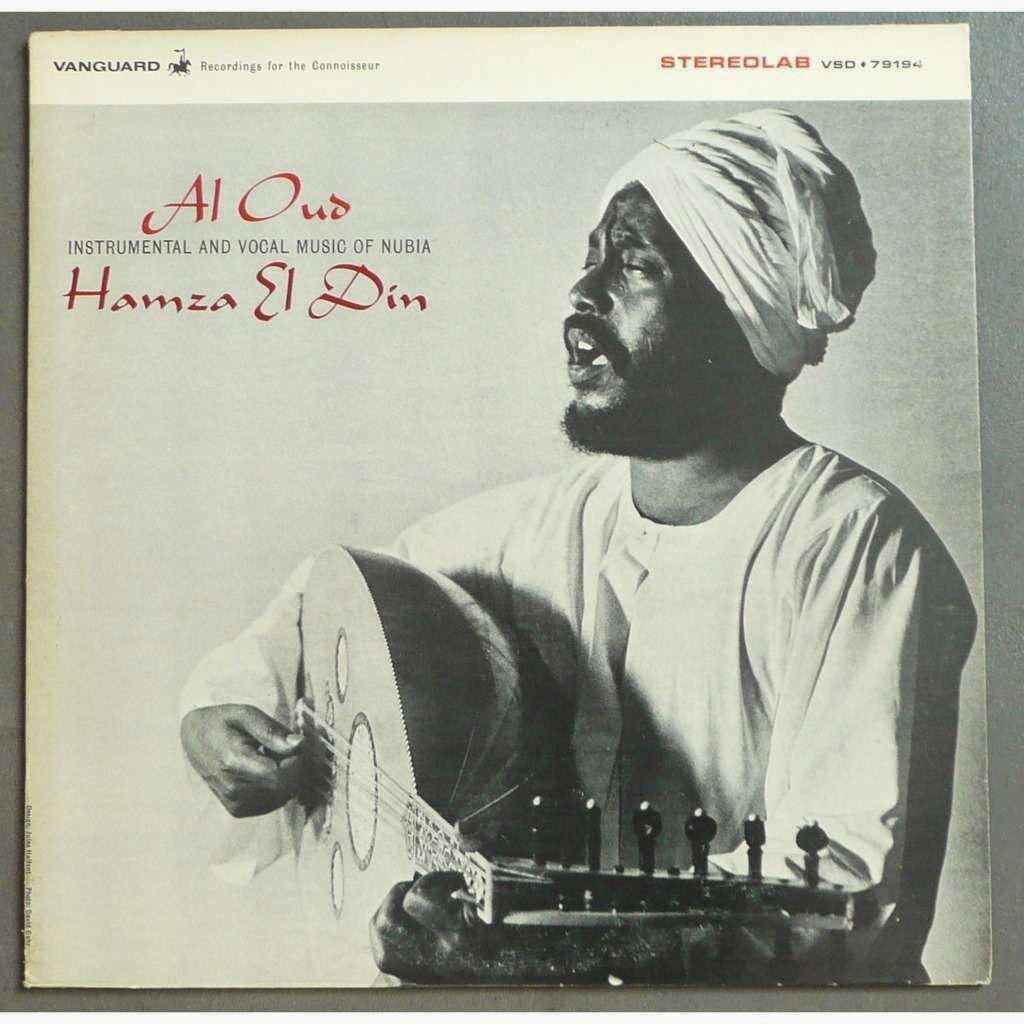 In a harrowing beautiful 12-minutes piece called" Water Wheel" Sudanese born musician Hamza El Din creates a lament for his village, which was flooded, and its people forced to relocate, after the Aswan High Dam was built. Entertainment Weekly, February 28, 1992. 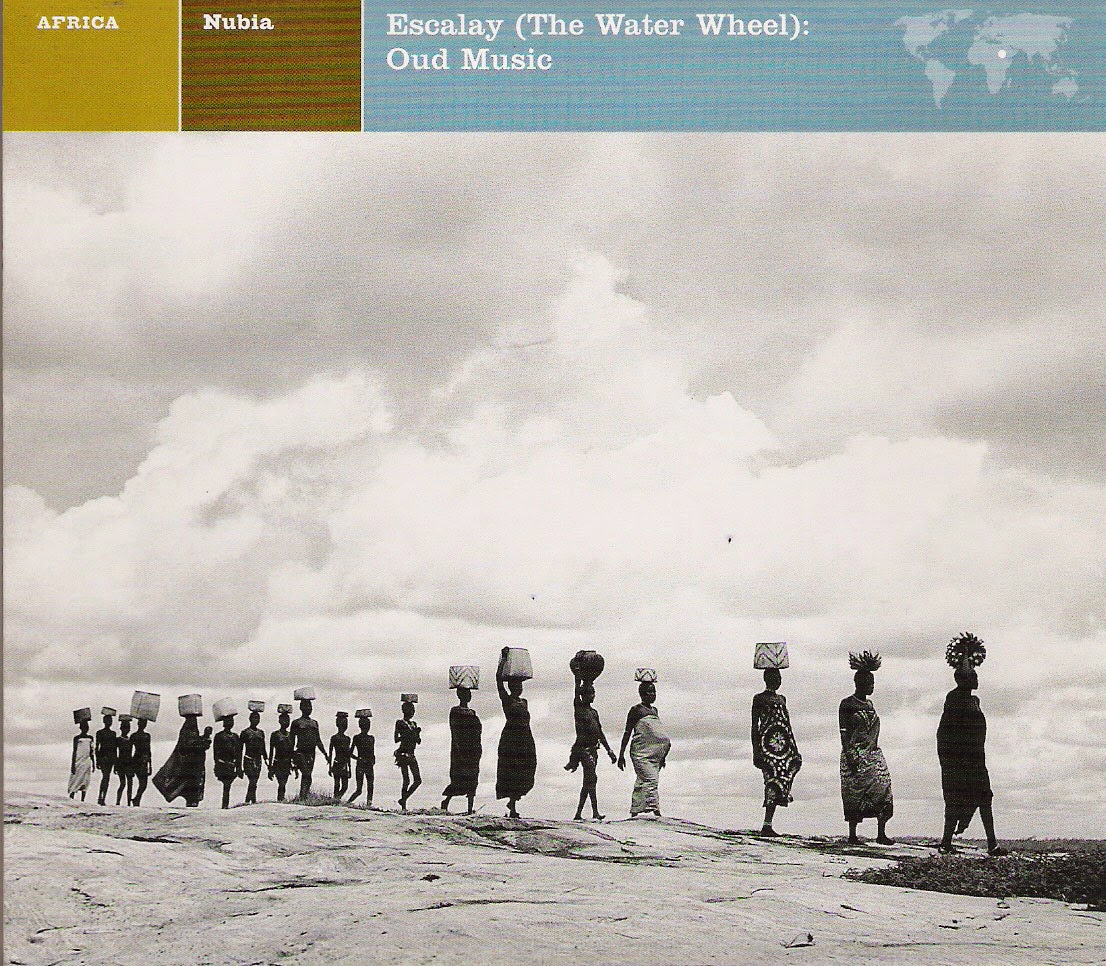 The Sudan has not figured prominently in the most faddish recent preoccupations with world music, but native son, Hamza El Din, has been an important influence in the reclamation and forward progression of indigenous Nubian traditions. In addition to mastering the TAR, he adopted the OUD and became virtuoso, playing in the both its traditional as an accompaniment to mesmerizing, chant like singing and as solo instrument. The SF Bay Guardian, Critic's Choice, January 2, 1992 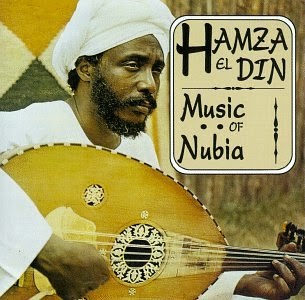 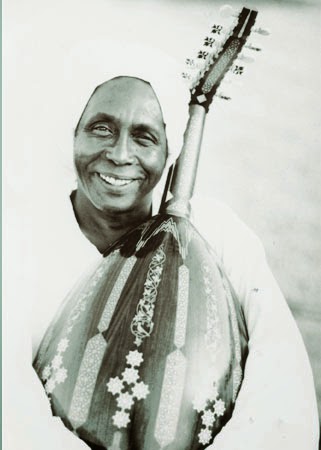 Music doesn't get much starker than the songs of Hamza El Din, the Nubian musician who performed Saturday night at the Triplex Theater .... He is a virtuoso, but one who uses his technique toward clarity rather than display. Jon Pareles The New York Times, Reviews, April 19, 1989 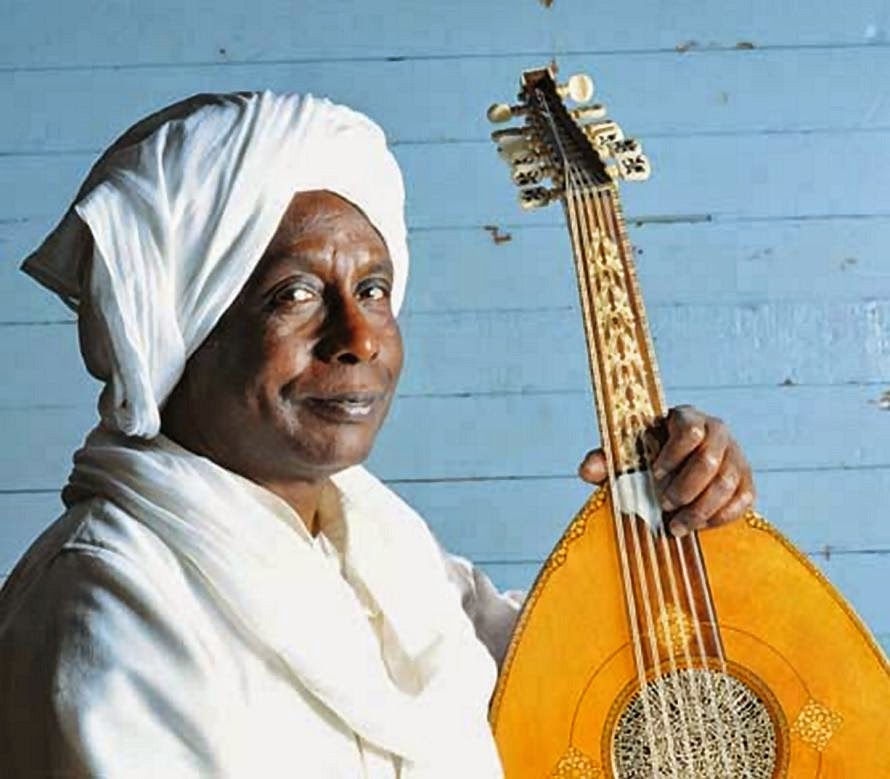