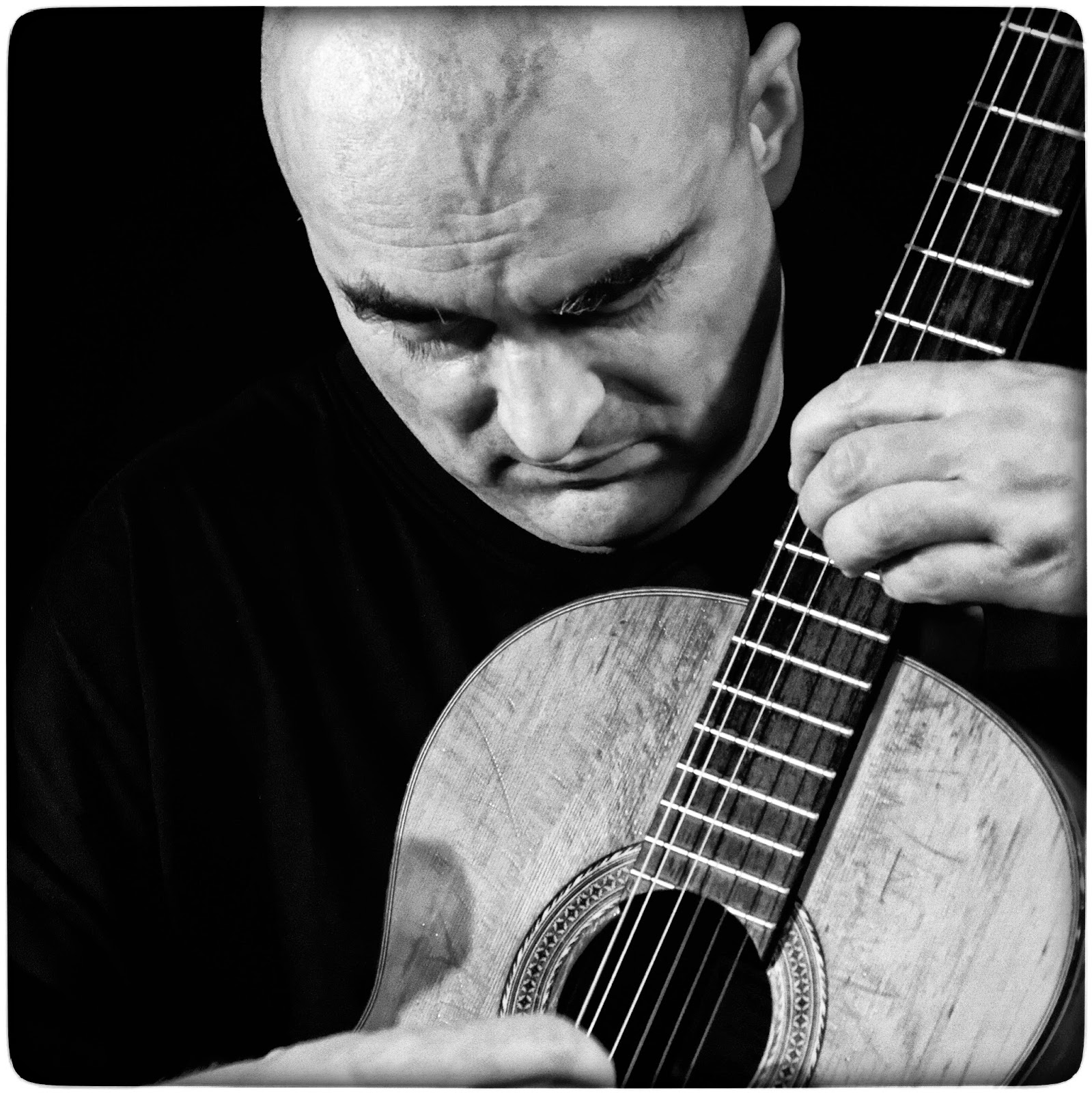 Olaf Rupp started at the age of twelve as an autodidact playing Improvised Music. In his teens, he also played some Blues, Rock and Classical Music but this was mostly due to the isolation of growing up in the countryside. Free improvisation was not really very popular in Hundsrück Forest. His way of holding the guitar in an upright position is inspired by chinese Pipa players and saves him from pain in the back. 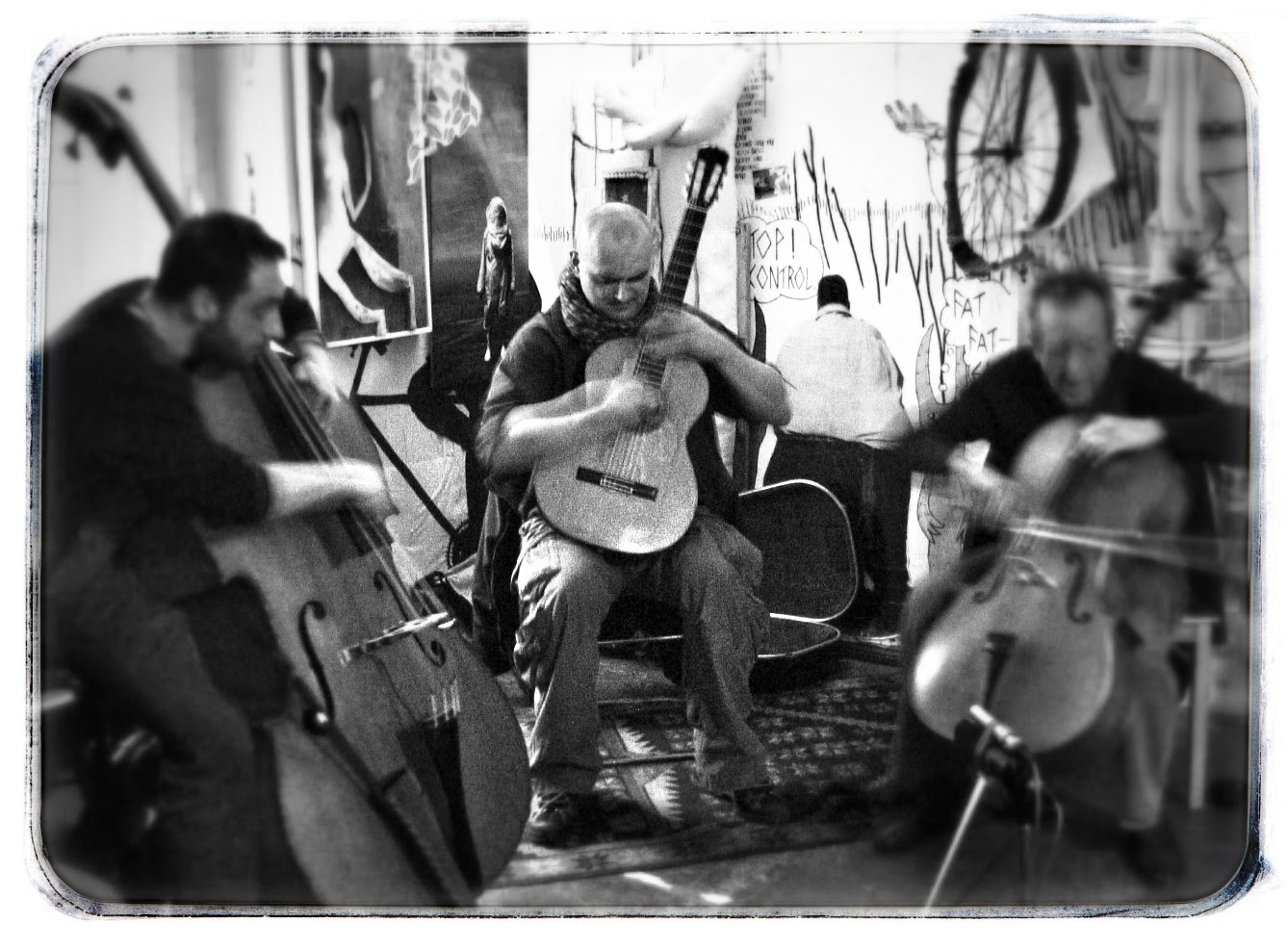 He refined some playing techniques like rasgueados, arpeggios and tremolos in such a way that they can be used for overtone and cluster effects to create new, "virtual" sounds. He sometimes describes this method as "analog granular synthesis" or "sonic pointillism". Both expressions refer to the idea of creating a complex flow of sound by mixing simple notes into one "virtual sound" just like the pointillistic painters Seurat and Signiac merged single dots of simple colors into a complex additive color mixing matrix. 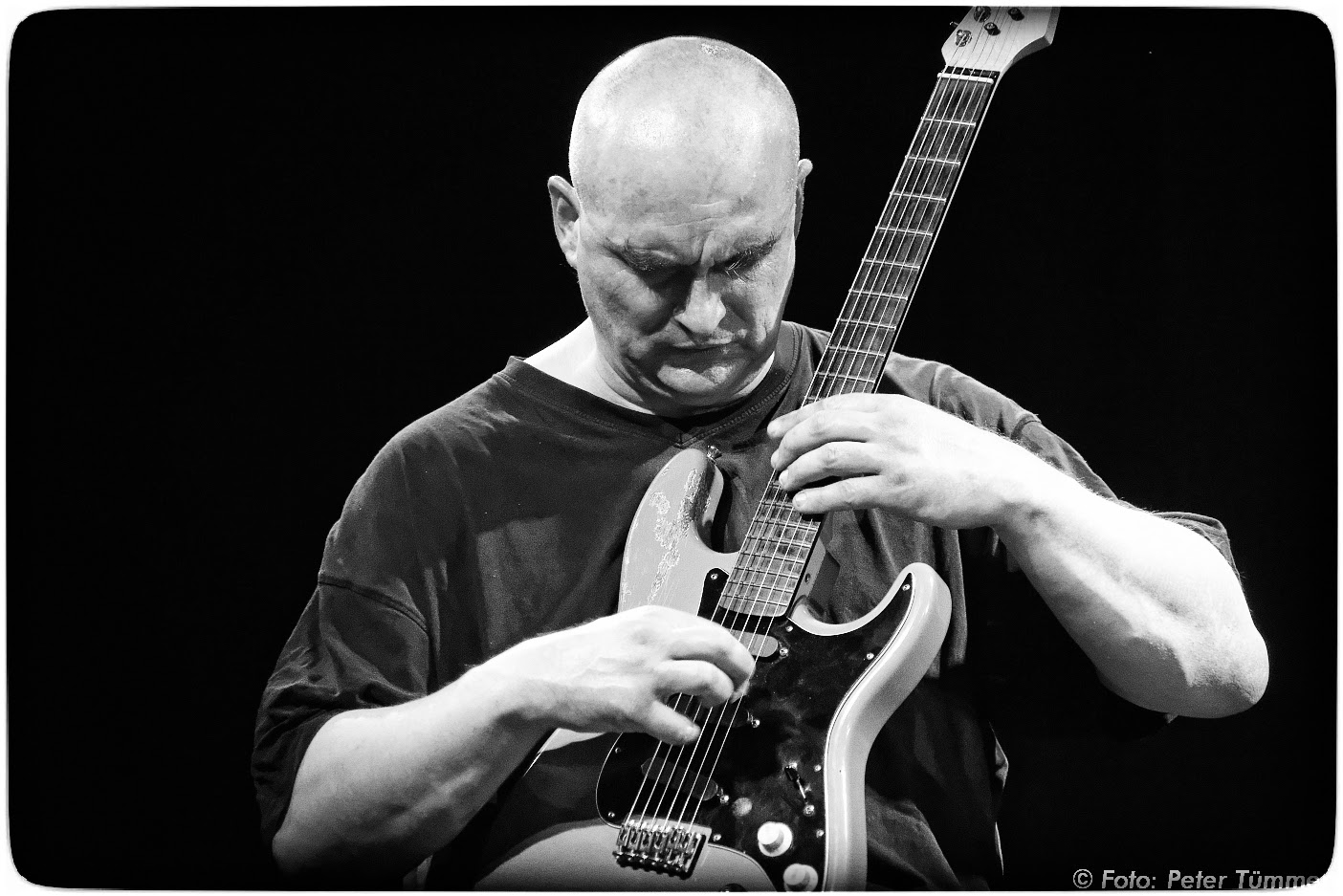 His use of time and density in his music is very much inspired by the wonderful celloloid paintings of Stan Brackhage. Olaf Rupp is thankful for having been able to perform with extraordinary musicians such as Lol Coxhill, Michael Wertmüller, Peter Brötzmann, John Zorn, Joe Williamson, Paul Lovens, Tristan Honsinger, Butch Morris, Tony Buck and many more. Five solo albums on FMP, GROB and GLIGG.

What do you remember about your first concert you played in?

I was 15 and we played with my first school-rockband in the backroom of a local pub. I played my guitar through an oldreel-tape recorder because there was no proper guitar amplifier around. I also remember how difficult it was to convince my bandmates to leave some room for improvisation in the song arrangements, and not nail down every bridge or verse or every voice. Improvisation was something completley strange to them. In the end we settled it in such a way that I could do what I want as long as I always knew where the rest of the band was playing inside the form.

Sadly enough many people think they can live perfectly without music. I certainly couldn't. That is a bit frightening to me because Germany is not a really fertile country for music. Buddhists say that one should try to get free from these kind of attachments. But (until now) I can't – I need my music.

It ist great to have an acoustic instrument that you can carry around and that still allows you to play several tones at a time (intervals, chords but also clusters and polyphony). But the biggest disadvantage is that the acoustic guitar is just a bit too soft in volume to play together with other instruments. And the electric guitar has this big problem of depending so much on what amplifier the venue is renting for you. For me a bad backline amp can really break a gig.

Actually, to be honest, most surprised I am always by playing acoustic guitar solo. The sound of the acoustic guitar always holds a surprise or two in petto for me. I am always amazed how many different sounds can come out of these simple six strings over a box of wood.

To me music is only sound in motion. And this motion should be free, unrestricted and direct. That was my natural perception, right from the beginning. So my roots are in abstract, free improvisation. I started with that when I was twelve. I only added to play classical and writing  rock songs (for a while) because at that time (in the seventies) free improv was quite nonfamous in the small village where I grew up. No chance to find other improvisors around in order to form a band.

The biggest change was done by MAI, a vinyl 12" and SEPTEMBER both released in 1998. I was in a crisis because my band STOL just broke up and I did not know what to do next. I had a lot of ideas and a lot of free time. So I decided to do an "opus" (which meant a fix, finished recording, ready for publication) every month each of them focussing on one of those many ideas. That is where the title comes from – the month it was done. Two of these works were actually published: one MAI on sieben-records and the other SEPTEMBER on GROB-records. MAI was totally electronic solo and SEPTEMBER only electric guitar solo. It helped me to make a decision and I later abandoned the electronic stuff in favour of the acoustic guitar. I don't regret this decision. I still like electronics, a lot of my ideas and inspiration comes from the completley different aproach to making music that electronic players can have.

About the guitars it is easy: on classical guitar I just need the sound of a nice, resonating torres instrument. On the electric guitar I am looking for a quite traditional clear sound of a Stratocaster into a simple powertube-saturated tweed-amp.

But when we talk about my abstract inner vision – that is harder to explain. I can always "switch" on that sound in my mind, like a radio in my head. And it plays sounds we hardly hear in real life. Gyorgi Lygeti's Atmospheres is very close to it. Stockhausen's Hymnen as well.

Turbo Capitalism. We are governed by really dangerous, unmusical bullies.

When I was a teenager some administrator of our local state-broadcast station gave me this advice: "Olaf, if you want to make a living from music, you should not play music yourself!" This was a really precious advice because A) I didn't follow it and B) it left no doubt to me how dangerous it is for musical inspiration to be depending on the benevolence of capitalist bureaucrats.

What music gear do you prefer?

My acoustic guitar is a Vicente Carrillio model Gabriella.
My electric guitar was always Stratocaster type guitars into simple and small powered tube amps. I was trying out a lot of different amps in the past years but the ones that turned out best were always the custom made amps of Michael Bender here in Berlin.

The celluloid painted films of Stan Brakhageof Stan Brackhage. They don't have sound but the images create very strong musical impressions in me. I know them for quite a while and they gave me a lot of inspiration in the past. But recently I kind of rediscovered them once again. I very often I imagine those moving images while I play.

Spectralism was quite interesting to hear and to think about. For a while.

In Improvised Music itself I don't see any really, really new, recent concept right now. Tough times are not always times for innovation.

Mixing the recordings from a tour with Peter Brötzmann. Mastering and cover-design for a CD with Tristan Honsinger, Axel Doerner and Oli Steidle and me that will be published on GLIGG records this year. Meeting some new players here in Berlin. Preparing some solo recordings in summer. 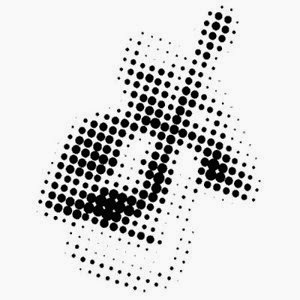 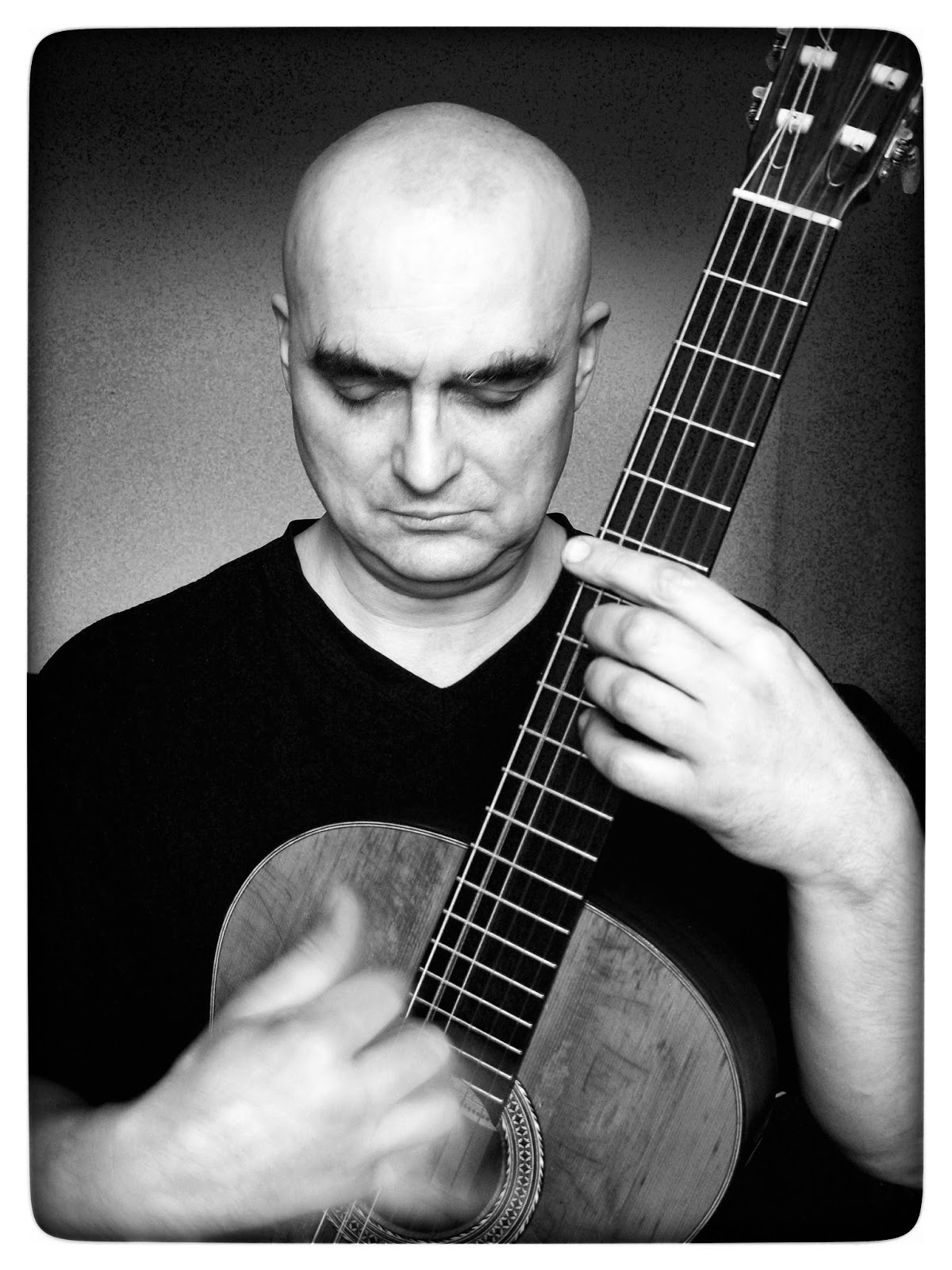