One of the most wily and most inventive figures on the German free music scene has to be Rüdiger Carl. His principal instruments are accordion and clarinet; he is, to say the least, a curious bandleader. On first glance, even his appearance suggests he would be the guy directing a wedding band rather than the terminally unruly and humorous Virtual Cowws. But that's his job: composer, improviser, iconoclast, multi-instrumentalist, and gadfly in the ointment of that thing we call "music." This three-CD retrospective of Carl's projects both inside and outside the Virtual Cowws -- most of the pieces on CDs one and two are extended versions of the Cowws quintet -- reveals an almost unbelievable range of musical adventure, and perhaps even genius. The first two discs (Book) are comprised of 46 selective moments in time, many of them collaborations with artists all over the globe both physically and musically. They include Mayo Thompson, Shelley Hirsch, Han Bennink, the Kipper Kids, Johnny Dyani, Hans Reichel (a sometimes member of the band), Lol Coxhill, Lupa Herrs, and others. And some of these are outrageous: Listen to Thelonious Monk's classic "Misterioso" with a vocal added by the terminally wonderful weirdo Mayo Thompson, and you'll hear something very different. The rest of the material on discs one and two is by an earlier edition of the Cowws called the September Band, the Cowws themselves, and various members in either solo or other smaller-than-quintet settings, recorded live, in rehearsal, and in private. All tracks were recorded between 1977 and 1996. In other words, when taken with disc three -- which is only the Virtual Cowws (Carl, accordion and clarinet; Arjen Gorter, double bass; Phil Wachsmann, violin and electronics; Stephan Wittwer, electric guitar; Irène Schweizer, piano and percussion) on one date playing one extended composition -- these provide a kind of secret retrospective, a map to a territory in the musical minds of Carl and his collaborators that is very private. That this has been released at all is a small miracle (thank you, FMP). None of the pieces on discs one and two is over six-and-a-half minutes in length, and the recording is thus easy to digest in small bites or large ones. The tunes range from the aforementioned Monk and Duke Ellington to Richard Rodgers and Henry Mancini, and the improvisations come from concerts, earlier issued recordings, and basement tapes -- except for disc three which is a previously unissued studio recording. This set, while not bargain-priced, is arguably the finest introduction to group improvisation or "free" music. If you are a Cowws fan, then this is essential; if you are looking for an emotional way in to a musical place you can't wrap your head around, this is definitely it. A truly inspiring collection. 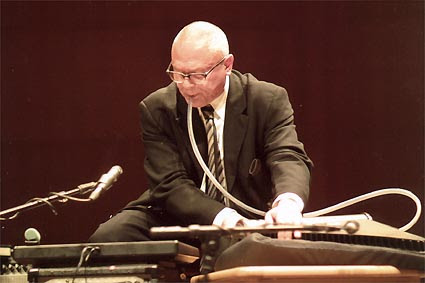 b. Rüdiger Hans Jörge Carl, 26 April 1944, Goldap, East Prussia, Germany. Adept on several instruments, notably saxophones, clarinet and accordion, Carl has been an active participant on the European free jazz scene since the late 60s. Among many musicians with whom he has worked are Arjen Gorter, Makaya Ntshoko, Louis Moholo, Maarten Altena, Tristan Honsinger, Johnny Dyani and Han Bennink. In particular, he has a long-standing musical relationship with Irène Schweizer that began in the early 70s. In the mid-70s Carl was a member of Globe Unity Orchestra, appearing on several albums including their 1986 recording 20th Anniversary. From the late 70s he has given solo performances and has also established other important and continuing partnerships, including those with drummer Sven-Åke Johansson and Hans Reichel. Together with Ernst-Ludwig Petrowsky, these three form the Bergisch-Brandenburgisches Quartett. Carl has also worked with Alexander Von Schlippenbach and the September Band.

Unusually among free jazz musicians, Carl has used the accordion in many of his performances. Indeed, the instrument is unusual, and frequently reviled, in any genre of jazz. It is a measure of his originality and technical skill that he has won over a large audience for the instrument (and also for the concertina that he sometimes plays). Carl, together with Jay Oliver, Phil Wachsmann, Stephen Wittwer and Schweizer, formed the COWWS Quintet, the group retaining its name when Oliver died in 1993 and was replaced by Barre Phillips who was succeeded later by Gorter. He is also a member of the Canvas Trio with Joëlle Léandre and Carlos Zingaro and has performed in duo with Mayo Thompson Léandre. In the late 80s and early 90s Carl was concert organiser of Musik Im Portikus at Frankfurt am Maine and from the mid-90s led the F.I.M. Orchester in the same city. A strikingly talented multi-instrumentalist, Carl has made a very big impact in free jazz and continues to explore original concepts that expand the envelope beyond previously set limits.