BELOIT, Kan. (AP) - Nelson Palen builds some of the sweetest sounding guitars in existence, and he doesn't even play the instrument.

Palen may not be a musician, but during the past three years, he has earned the respect of jazz guitarists throughout the world. When these professionals pick up one of Palen's archtop guitars, they instantly know they are playing an instrument with a unique tone, depth and resonance.

Nelson Palen of Beloit is seen through a template last month while holding one of the archtop electric jazz guitars he made in his basement workshop. Famed jazz guitarist and singer George Benson bought one of Palen's creations. 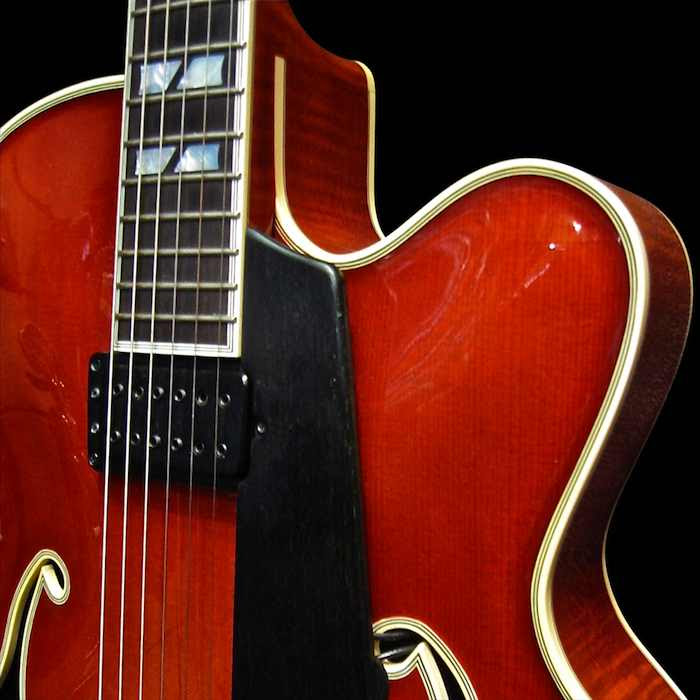 Famed jazz guitarist and singer George Benson bought one of Palen's guitars last year at a classic guitar show in Long Island, New York. Rodney Jones, professor of jazz guitar studies at the Manhattan School of Music in New York and former lead guitarist on "The Rosie O'Donnell Show," was so impressed with Palen's guitars he offered to endorse them. 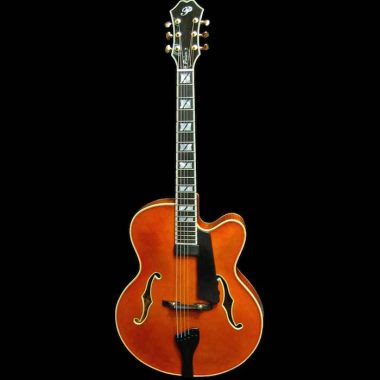 "What makes them great is an intangible thing, like a great painting," Jones said from his home in New York. "Having played the guitar for 39 years, I know a great one when I feel it. Nelson's an artist who just happens to make guitars." Since 1999, Palen has built and sold 18 guitars and has 10 more in various stages of completion in his basement workshop. Each guitar sells for about $4,800. 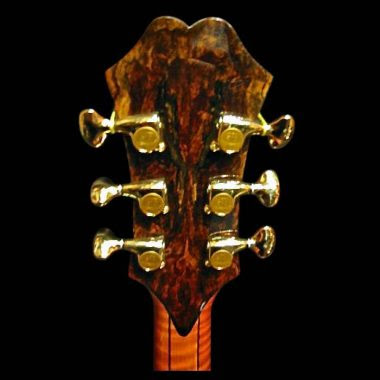 Palen's sudden success has taken him by surprise. A design engineer at Sunflower Manufacturing in Beloit, Palen, 56, had been a woodworker most of his life and for 12 years designed and sold decorative wooden bowls. While that was satisfying work, Palen was itching to find something to make that would really challenge his carving skills. A co-worker there encouraged him to make his first guitar. 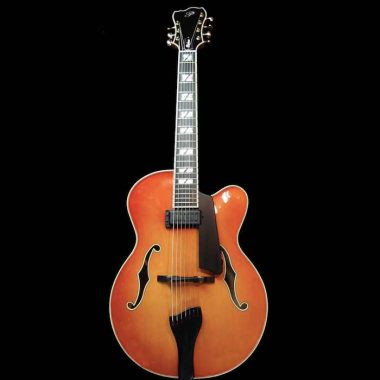 Palen credits the Internet with supplying him a wealth of information on archtop guitar- building, an instrument used primarily in jazz music. He took an Internet-based guitar-making class, and bought a video on the subject. He also corresponded with other archtop builders. 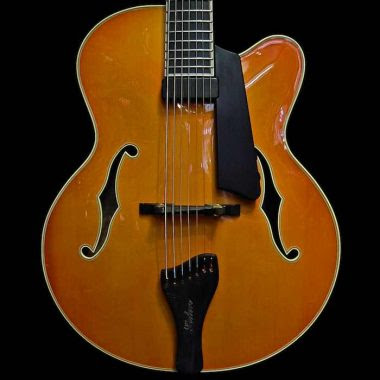 The back panel and soundboard (front) of the archtop are made from two thin wedges of wood. When these pieces of wood are glued together and carved into a dome shape at the center, the look is similar to that of a violin. The front of Palen's guitars are made from Engleman spruce from the northeastern U.S., and the back plate and sides are made from Oregon, Washington or Vancouver maple. 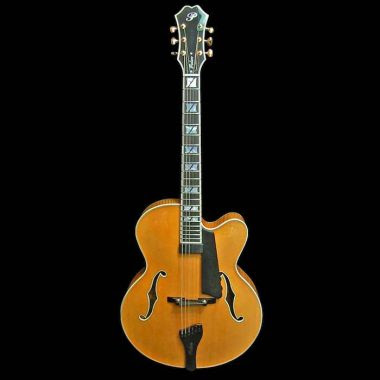 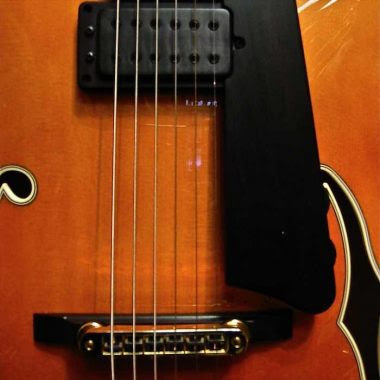 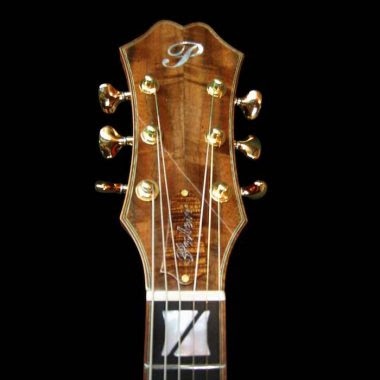 "You listen to the tone produced. You should get a clear tone - not a particular note, but a crisp tone," he said. He continues the scraping and tapping until the tone is just right.
"Each one will sound just a little different, as opposed to something that's just an assembly-line product. You try to make them the same as possible, but each guitar is unique." 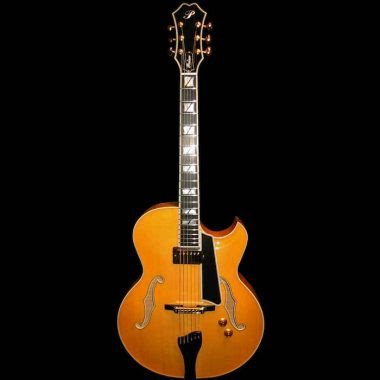 Palen estimates it takes him about 150 hours to build a guitar, working 30 hours a week on evenings and weekends.
Palen built three guitars before he got up the courage to sell one on the Internet. A man from New Jersey bought the guitar on eBay, then told his business partner about the instrument's high quality. Suddenly Palen had a promoter and distributor, Lou Del Rosso, who runs a business called guitarsnjazz.com. 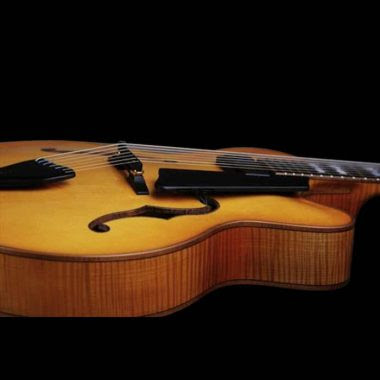 He said the instant he held Palen's guitar, he knew it was remarkable. "The tone is just wonderful," said Del Rosso said from his office in Summit, N.J. "I've had many professional players comment on its resonant tone. Anyone with a good ear can tell how good it is."
George Benson certainly knew.

The famed jazz guitarist tested one of Palen's guitars at the Long Island Classic Guitar Show, then turned to Del Rosso and asked if he could buy it. "He said it was a beautiful guitar, and then he handed me his American Express card," Del Rosso said. "I  lmost fell over." 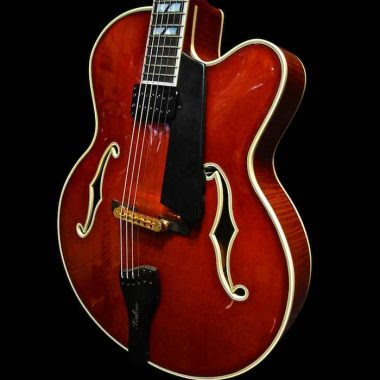 Today, Del Rosso said, there is a waiting list for Palen's guitars, and he believes as Palen continues to refine his skills, his reputation will grow. "Consistency is the most important thing Nelson has," Del Rosso said. "I think his woodworking background helped a lot, but he's also able to produce guitars that have a consistent sound, and that's not an easy thing to do." 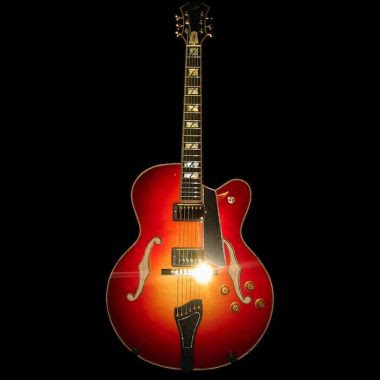 Jones agreed: "His guitars have a resonance that transcends the wood. I think it's an intuitive process for him. He has a sensitivity and awareness of his craft, and he puts love and feeling into each guitar he makes. He's an artist through his craft."