On Playing Feldman by John Tilbury


Almost all Feldman's music is slow and soft. Only at first sight is this a limitation. I see it rather as a narrow door, to whose dimensions one has to adapt oneself (as in Alice in Wonderland) before one can pass through it into the state of being that is expressed in Feldman's music. Only when one has become accustomed to the dimness of light can one begin to perceive the richness and variety of colour which is the material of the music. When one has passed through the narrow door and got accustomed to the dim light, one realises the range of his imagination and the significant differences that distinguish one piece from another ... Feldman sees the sounds as reverberating endlessly, never getting lost, changing their resonances as they die away, or rather do not die away, but recede from our ears, and soft because softness is compelling, because an insidious invasion of our senses is more effective than a frontal attack. Because our ears must strain to catch the music, they must become more sensitive before they perceive the world of sound in which Feldman's music takes place.

It seems wholly appropriate to quote these words of Cornelius Cardew from the early sixties. In an interview in the summer of '85 Feldman recalled, Cornelius played my music beautifully and I don't think anybody wrote about my early music as beautifully as he did.
In fact, Cardew's description refers equally well to the later works, notwithstanding all the profound changes Feldman's music underwent during the last ten years; for it is above all to this world of sound that the music owes its strength of continuity and its unique quality. 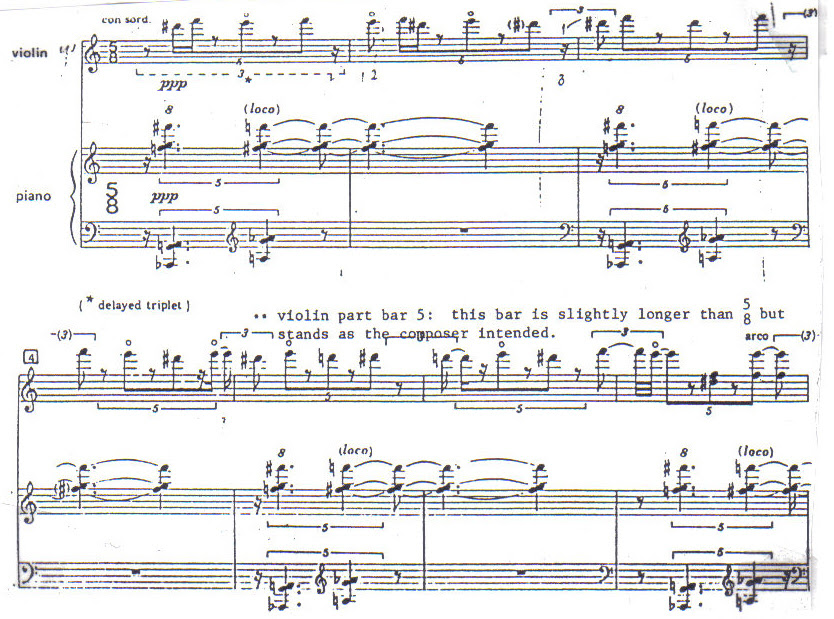 As performers of contemporary music we can move comfortably from Boulez to Carter, to Henze, and we can compare and contrast their methods, techniques, modes of expression, indeed their personalities; but essentially they inhabit the same musical world, a world moreover inherited from their great predecessors. For the mode of sound production in which we have been trained over the years through tuition and examinations at our conservatories still stands us in good stead. We can retain our traditional, time-honoured methods of phrasing and articulation, too. If we can make sense of the HAMMERKLAVIER sonata we can also make sense of Boulez' 2nd piano sonata. But above all what characterizes these composers is their acceptance of and dependence on received instrumental sound, the execution of which is taught and honoured in our music colleges and which bears an aesthetic which intervenes at the most crucial stage of music-making, at the very point of production, to produce a quality of reassuring familiarity and respectability.

This is what Feldman was referring to when he remarked, Most of the music you hear in London is official music, as if it was written for the London Sinfonietta ... For London read also Paris, or Milan, or Cologne, or Vienna ... In the hands of executant experts the authority of received sound will legitimize and sanction even the most brutal extravagances of modernism, such as the monstrous serial edifices spawned through Darmstadt in the fifties.
And herein lies the world of difference between Feldman and, in particular, his European peers; because through the infamous softness and slowness of his music and a radical commitment to the muscular, physical and essentially sensual qualities of the art of performance Feldman thwarts the attempts at expressive reduction and control which our conservatory training operates.

Tudor and Cardew were virtuosi, which has nothing to do with velocity or petty digital scramble (Barthes), by virtue of the extraordinary sounds they drew from the piano. Their performances steered a hazardous course generating risk and excitement: the phrasing and articulation 'situational', determined spontaneously by the idiosyncrasies of individual sounds at particular moments, by ambience and acoustics, by the imperfections in the instrument and the dimensions of the room. And this is Feldman's way.

From ancient China there is a description of a vibrato technique: Remarkable is the ting-yin, where the vacillating movement of the finger should be so subtle as to be hardly noticeable. Some handbooks say that one should not move the finger at all, but let the timbre be influenced by the pulsation of the blood in the fingertips pressing the string down on the board a little more heavily than usual.
Such extreme sensitivity of touch is of the essence in a performance of Feldman's music. In the piano pieces the depressed key is gently eased back to position to minimise the obtrusive sound of the key mechanism, time is allowed for the minutest of harmonics to resound, and at the end of the phrases fingers steal away from the keys noiselessly.

Repetition is one of the formal characteristics of FOR BUNITA MARCUS; sometimes immediate and sequential, often through the deployment of the same melodic and harmonic material throughout the whole piece. The repetition of a phrase may be subtly varied through rhythmic displacement, or the lengths between a number of repetitions are varied. In FOR BUNITA MARCUS the metre is constantly changing. The purpose is not rhythmic characterisation, however; rather it is the way Feldman controls and influences the flow of the music: a way of notating rubato. And in the final section he brings the music almost, but not quite, to a standstill: phrases fragmented, separated by the only (near) silences in the whole work which is played with just two changes of pedal.

The ending foreshadows the last measures of PALAIS DE MARI - Feldman's last work for piano; the rising intervals gently propel the music upwards and away, floating through an immense space.
In rehearsal Feldman would help his performers by describing the sounds as sourceless. He wanted them to take on that precious quality of transience, of uncatchability (Cardew's word), to be free but not arbitrary, elusive but compelling.
We are reminded of an old Taoist dictum:


The greatest music has the most tenuous notes.